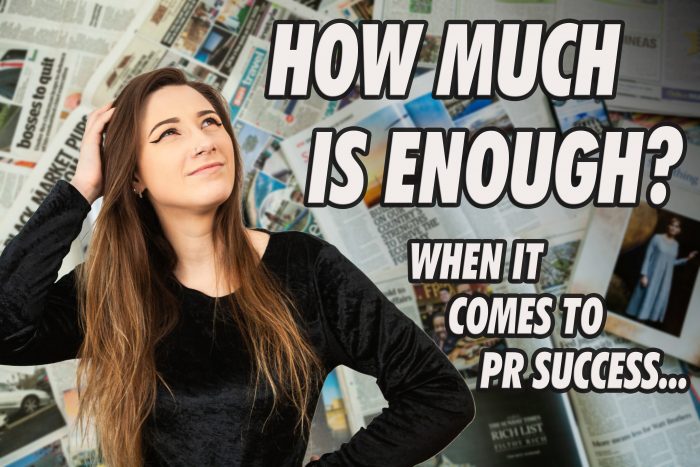 SIZE doesn’t always matter. Of course, there are a lot of things in life where bigger means better.

A bigger crowd at an event is generally a good thing – which perhaps why Donald Trump was so upset at the pictures showing a smaller-than-expected audience for his presidential inauguration.

Likewise, the bigger the distance achieved by a long jumper, shot putter or javelin thrower, the better shade of medal they’ll achieve at competitions.

Similarly, in PR, it’s true that sometimes you’ll need the biggest possible haul of media coverage, that shouts from all corners about how brilliant your product or service is.

Yet in other circumstances, you’ll need a more considered and targeted approach with the media to achieve your aims.

Luckily at Holyrood PR, we’re extremely adept at both. Let us explain when enough is enough…

There can be all manner of reasons as to why you’ll want to get your business’ news in front of as many eyes as possible.

Perhaps you want people to know that you’re here and open for business? Or maybe you’ve got a new service to promote, or a new member of staff and want to demonstrate the growth of the business?

We’ve also had great success when it comes to our clients rebranding, for example when the Sick Kids Friends Foundation became the Edinburgh Children’s Hospital Charity.

At Holyrood PR, our experience of the media and expertise when it comes to crafting media releases and invites, means we’re able tailor releases to reach as many people as possible.

When our client, Gilson Gray, recently took over the North Berwick branch of property firm Lindsays, it wanted to shout about it from the rooftops, to ensure as many people as possible new of its foray into a new geographical area.

Often such a story could be limited to local media and trade titles. However, we were determined to deliver outstanding results and met with Gilson Gray to really get to grips with the story and drill down into how it could be projected to catch the national media’s eye.

We settled on the focus of Gilson Gray’s rapid growth and the news that it was bringing its city expertise to local towns – injecting the usual business takeover narrative with a fresh edge and bags of added interest.

That creative thinking worked a treat, with great national coverage in influential papers such as The Scotsman and The Times, as well as key local coverage in The East Lothian Courier and a whole host of key trade titles.

Sometimes big coverage can seem amazing on the surface but when you dig a bit deeper you realise that it’s largely going to be ineffectual and you’d be much better placed with a targeted release and a clear focus in mind.

One such example we had great PR success with was our work with CALA Homes, for its planning application for the Waterfront Plaza development.

The land situated opposite the Ocean Terminal shopping centre in Leith is currently disused and CALA had identified it as a brilliant area for a new development of much-needed housing.

However, the proposal wasn’t without its objectors, and a considered and well-structured PR campaign was required to ensure the news around the proposal was seen by key influencers.

We believe in getting multiple bites of the cherry when it comes to stories, so instead of just one story about CALA looking to develop on the site, we created a PR plan to encapsulate the project with a series of media releases over a period of months.

We shared stories about the benefit to the local community, the benefit to the shopping centre, the desperate need for housing in the area, political backing and even crafted a platform piece from a local influencer to demonstrate exactly why the plans were needed.

And it worked perfectly, with a recommendation for refusal eventually overturned and the plans approved.

This was a case were our coverage in key places such as the Edinburgh Evening News was far more valuable than multiple cuttings across media outlets where the decision makers in the council wouldn’t be looking.

SO HOW MUCH IS ENOUGH?

To summarise, the best way to judge if your PR agency is giving you value for money is not by simply counting the coverage, but instead deciding what impact the coverage they are getting is having on your business.

The amount of coverage you receive ultimately depends on the stories you have to tell.

What we pride ourselves on at Holyrood PR is finding those excellent stories that you might not even be aware of, and using them to transform your business.

Whether you’re looking for a large reach across the media, or have a specific publication in mind, we’re adept at providing both.

IF YOU WANT EXCELLENT COVERAGE FOR YOUR BUSINESS, GET IN TOUCH WITH OUR EXPERT TEAM

We know only too well that clients want to see a strong return on their investment – that’s why we push so hard to help our clients enjoy instant PR results. by calling 0131 561 2244 or by taking a few seconds to complete and send the simple form below: