Primary education publication the Primary Times, has featured details of Scribbler’s card competition on their website.

The UKs number one card retailer launched a competition in May seeking an inspiring design that sums up people’s views on their favourite Scottish cities.

They are looking for people to come up with a winning design that best captures the nature and culture of Edinburgh and Glasgow – the winning entries will then be made into a card that will go on sale in the Scottish stores.

Founder and owner of Scribbler John Procter states in the article: “We want to find out what image Scottish people think defines their most popular cities and then create a greetings card that we can sell in our newest stores.

“One of our best sellling cards in our English stores features the changing of the guard at Buckingham Palace where the poor guardsman has fallen flat on his face.  Its a powerful image because it’s easily recognisable but undoubtedly funny at the same time.

“It’s clear that there are more to Scots than the tartan wearing haggis munching stereotypes.  We would really like to tap into the famous Scottish sense of humour.”

All entries whether that be photographic, ink, pencil or paint are wlecome and can be submitted via facebook or twitter or handed into any of our friendly staff at our stores across Engalnd and Scotland.

John adds: “The winning entry will be turned into a card and given pride of place in the Edinburgh and Glasgow stores.

“It’s an excellent chance for a would be photographer, artist or designer to get their work seen by a large audience or simply for a proud Scot to have their say on the cities today.

“The only rule with this competition is that anything gopes.  We can’t exactly ban swearing because some of our most popular cards use colourful language anyway.”

The card competition is running untill June 30th giving would be artists and budding photographers plenty of time to get their entries in.

The full article can be read on the Primary times website and was secured as part of a successful PR and social media campaign carried out by the Holyrood PR. 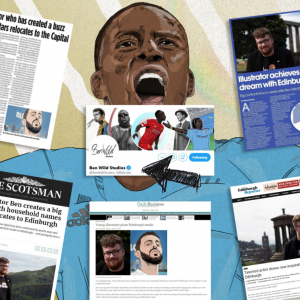