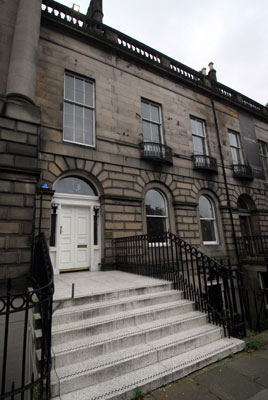 Chic corporate clothing specialists NKD Clothing has designed a range of outfits for one of Scotland’s most hotly anticipated restaurants – and the designs are so top secret not even restaurant staff are allowed to see them.

NKD were approached by the owners of 21212, a new restaurant opening in Edinburgh on May 20, to design a range of outfits that were smart and stylish yet a touch different to other high-end restaurants.

However, since Michelin-starred chef Paul Kitching announced the opening of the restaurant in Edinburgh’s Royal Terrace, left, it has been surrounded by a veil of secrecy and an air of mystique.

That means everything from the décor to the menu to the staff outfits will be kept under wraps until the official opening on May 20.

While that presented various challenges to design manager Jill Robertson, not least because she has been unable to use samples to ‘size’ the staff, she has now come up with a design that has thrilled the owners and one that she believes will impress staff and customers at the opening.

Jill said: “The brief was very much that the outfits had to be a bit different from what you normally find in a top restaurant.

“The restaurant concept itself is quirky and different and that allowed us to be more creative in our designs because they were open to new ideas.

“However, because there is so much excitement surrounding the opening of the restaurant, absolutely everything is being kept under wraps so that gave us a few challenges.

“I presented three different designs and the one they went for was the most original and undoubtedly my favourite. I’m delighted with what they have chosen because it will make a real statement of individuality as a restaurant.

“It’s not what you would normally find staff in a top-end restaurant wearing but the outfits are still smart and extremely stylish. I’m looking forward to hearing people’s opinions when the restaurant opens.”

NKD Clothing, based in Edinburgh, is one of the UK’s leading designers and providers of bespoke uniforms, work wear and corporate clothing. It is particularly strong in the catering and hospitality sector and has outfitted staff in leading hotel chains such as Malmaison, Hotel du Vin and Dakota.

The company has been identified by Scottish Enterprise as a potential high-growth company. Since Gill Eastgate let a management buyout in 2005 she has turned it into £1.3million a year business employing nine people in Edinburgh.