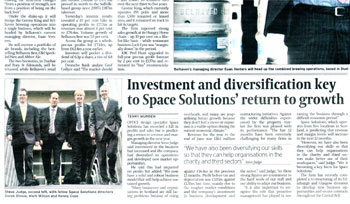 Scotland’s leading workplace design company has celebrated another PR in Scotland success with prominent coverage in a national newspaper.

Space Solutions was featured in the business pages of The Scotsman, which reported on the firm’s strong performance and turnover in 2010.

Results for the year to the end June 2010 show the company delivered an impressive performance despite the recession to achieve revenues of £16.1m, only fractionally down on 2009’s figure of £16.4m. The solid results marked the culmination of another successful year for Space Solutions, which has seen the firm jump more than 100 positions to 70th on the Insider SME 300 list – one of Scotland’s top business indicators.

The full coverage can be viewed on the Scotsman website and was the result of a sustained PR in Scotland campaign by the Holyrood PR.