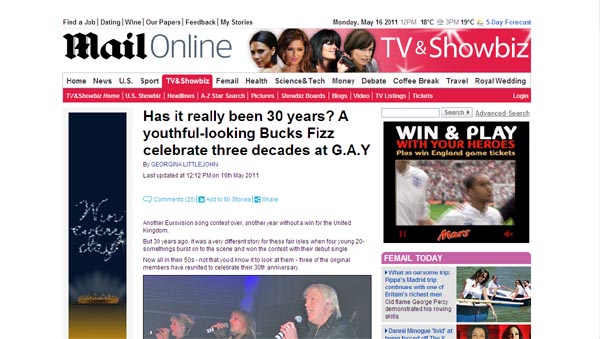 Today’s links are bought to you by the Holyrood team so why not drop us a tweet or facebook message and tell us what you think of our top links and suggest links we should feature – or you could just say hello and we promise we will reply.

On Thursday we linked to the new Cadbury advert which features clothes appearing to dance to the 80’s classic ‘You Don’t Have to Take Your Clothes Off’ and today we reveal the secrets to just how the creative ad was made – and it turns out there wasn’t a bit of CGI trickery in sight! That’s right the whole minute and a half advert was created by dancers wearing clothes and on a set that was twice the normal size. The 19 dancers, slipped into the larger than life suits after just two weeks of intensive training to crate the impressive ad. A Cadbury spokesperson said: “People are so used to seeing CGI so we wanted to create the ad in traditional very lo-fi way” and it has certainly got people talking with viewers taking to twitter to discuss just how it was made – well now we know.

When it started out, YouTube was best known for the rough and ready charm of its user generated content of pets, kids and unfortunate accidents – a Candid Camera meets You’ve Been Framed for the web generation.Since buying the start up in 2006, Google has been on a relentless push to earn money from the video sharing site. Originally expected to displace and disrupt traditional TV, it is now increasingly looking to traditional, high-quality content to attract audiences – and advertisers.

I have always been a big fan of the cleverness and creativity of the Lynx adverts which coined the term the ‘Lynx Effect’ thanks to the help the super deodorant can give to the male species who are looking to pull. This latest advert from the Lynx team doesn’t disappoint – titled premature perspiration it may be a little risqué in the innuendo stakes but provides a clever and funny ad that perfectly sums up the Lynx brand. Made in Argentina and now shown in the UK, the ads are a pun on premature ejaculation as the men in the adverts depict various premature ‘perspirations’ which scupper their chances of winning a young lady. That is until they get a spray of Lynx to help them control their perspiration nightmares.

IF YOU WANT TO BE A RECORD BREAKER, DEDICATION’S WHAT YOU NEED (Adrian)

As any viewers of Roy Castle’s legendary 80s show will tell you, it takes dedication to get into the Guinness Book of Records. And although the athletes of this world push themselves to the limits to achieve the fastest in history, there are thousands – if not millions – of other people who have made it their goal to be a record breaker. But none of them can hold a candle up to New York health food store manager Ashrita Furman, who has been revealed as the man currently holding the most Guinness records. Starting in 1979, when he set his first record by doing 27,000 jumping jacks, Ashrita has set a whopping 342 separate world records over the years. And, as of 2011, he held 121 records in the official Guinness World Records register – making him the most proficient record breaker of all time. Oh, and he’s also set records on all seven continents. What a show-off…

MAKE YOUR MIND UP – DO THEY LOOK GOOD FOR IT? (Raymond)

It may have been another year of no success for the UK in the Eurovision Song Contest, but it did give our most successful winners a chance to dust off their rah-rah skirts. Bucks Fizz celebrated the 30th anniversary of their win with by performing a six-strong set at G.A.Y. in London at the weekend. And, of course, the biggest cheer was reserved for a repeat of THAT skirt-ripping scene on the Making Your Mind Up track that made them popstars across Europe. The only negative – there is still a massive feud with band member Bobby G who wants to use the Bucks Fizz name.