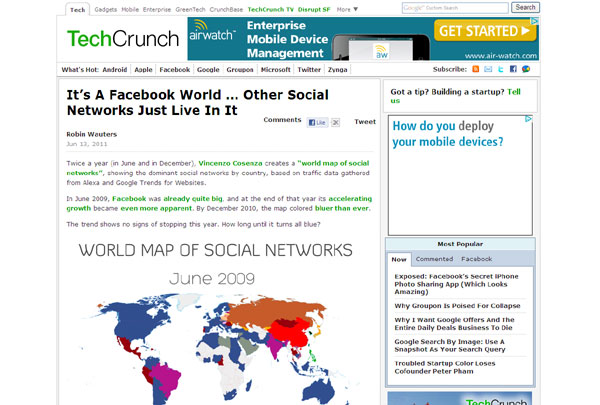 We would like you to use our Facebook and Twitter pages to tell us what you think of our links – see them as your portal to connect with us. Suggest your own too, if you think it’s worthy.

Social networking giant Facebook is rumoured to be ready to float on the US stock market – for a cool $100 billion, while also creeping ever closer to the magical one billion registered users. Founder Mark Zuckerberg is probably unruffled by reports that users are actually quitting the service in the UK, Canada and the US (http://bit.ly/kgErip). Especially since this video shows that the relentless Facebook bandwagon is turning huge swathes of the world blue.

Hugh Hefner is another big name celebrity who has dispensed with publicists or Hollywood bloggers and instead looked to use Twitter to offer his latest proclamations. Sadly for the Playboy king this was to proffer a piece of bad news – to announce that his marriage to former Playmate of the Year Crystal Harris is off.   The ‘Heff’ told his remarkably large 639,000 followers that Crystal – some 60 years his junior – had ‘had a change of heart’. As sympathy tweets flowed in from his followers, Hefner issued a number of other messages on Twitter to outline his thoughts. And, of course, the news was picked up by the media and made headlines across the world. It’s another interesting demonstration of how the world of PR and journalism is needing to adjust to impact of social media.  Ten years ago – Hefner would be knee deep in agents and PR people as he grappled with how to announce his broken engagement.

This cautionary tale highlights how some people behave incredibly stupidly on Facebook, because they forgot normal social rules still apply. I didn’t know whether to laugh or cringe at the case studies (I did both). Even if you’re not one of the people rendered a dribbling buffoon by the action of updating your status, there are still a few suggestions in here that we can all take on board. Personally, I think the best way to avoid getting burnt is to check out www.lamebook.com.

MUPPET PARODY TURNS OFF THE DARK FOR SPIDERMAN (Adrian)

The much-derided and troubled musical Spiderman: Turn Off the Dark has been a long-running thorn in many comic book fans’ sides. It was heralded as a spectacular opportunity to see a live-action stage production of the Spiderman story and had a humungous amount of money spent on it. Hell, even Bono and The Edge did the music for it which can’t be cheap. However, serious safety problems with the stage set-up continually halted the production for months – and even though it has now finally opened on Broadway, the musical already being used as a by-word for failure. It’s the new Cutthroat Island or Ishtar, only for the stage rather than the big screen. As if the producers weren’t reeling enough from their artistic misery, they’ve now been given an ungracious kick in the nuts from the unlikeliest source – the Sesame Street muppets. This parody is being used on a forthcoming episode of the show and you have to admire the writers’ attempts to slip topical gags into a show that is intended for pre-schoolers. Top work.

Last night, I turned on the movie “Cheaper by the Dozen” after battling with the TV for something to watch. At one point in the movie, Steve Martin’s character is left alone to look after his twelve children without the help of his wife. It seems even in this day and age, the thought of spending a weekend along looking after the children strikes fear into a father. Today, I came across this article in the New York Times which confirms this terror – which made me smile nonetheless.