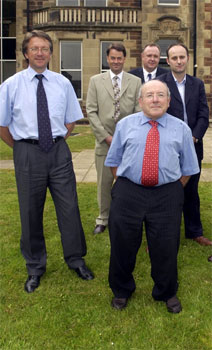 The Government’s reluctance to confirm whether it will be extending the Stamp Duty freeze into 2010 is leading to unnecessary confusion in the property market, according to a group of the Lothians’ leading property solicitors.

The ELPG believes that house buyers and sellers are being frustrated by Chancellor Alistair Darling’s unwillingness to confirm whether the Stamp Duty exemption on properties under £175,000 will come to an end on December 31.

The raising of the Stamp Duty threshold from £125,000 to £175,000 was introduced last year in an attempt to stimulate activity in the UK property market. At the time, the ELPG – who had been campaigning for a complete freeze on Stamp Duty – said that the move would encourage first time buyers to consider taking their first step on the property ladder.

However the new threshold was originally planned to last only until the end of 2009, and so far the Government has made no decision on whether to extend it further and help build more stability in the property market.

The ELPG, which consists of Warners, Neilsons, Drummond Miller, the Lints Partnership and Leslie Deans & Co, is now urging the Chancellor to make an immediate decision on Stamp Duty in order to quell the ongoing confusion among buyers and sellers.

Les Deans, senior partner at Leslie Deans & Co, said: “We welcomed the Chancellor’s decision to raise the threshold in 2008 and it has certainly helped many housebuyers who have bought properties under £175,000 in the past year.

“However, we have always had concerns about the fact that the Government has remained tight-lipped on whether this new threshold will continue past the end of the year.

“It is still an uncertain time in the market for many buyers and sellers at the moment. The recession is still going on, while house prices and property sales are still well down on their peak figures from 2007.

“Although we’ve reached a point where property sales and house values are starting to take a turn for the better, the market is still fragile and uncertainty over stamp duty will not encourage the growing sense of confidence  which is appearing in the market.

“The Stamp Duty freeze was meant to help first-time and lower-level buyers secure properties, so it would be unwise to revert the threshold back to apply only to homes under £125,000. As it stands, home buyers in the price range between £125,000 to £175,000 would be well advised to make a move now – otherwise after the turn of the year they will be paying up to £1,750  in stamp duty when they buy a new home.

“The Chancellor needs to come clean with what his plans for Stamp Duty in 2010 are.”

Positive PR in Scotland for the ELPG

The last time a Stamp Duty freeze was implemented was in 1992, when John Major’s government decided to act during a dramatic slow-down in the UK property market and with the economy struggling with recession. At the time, the government increased the minimum threshold from £30,000 to £250,000, which exempted the majority of house purchases.

The idea was to reinvigorate the property market and prevent a total collapse. By the middle of the year transactions had nearly doubled and, although activity fell off again, industry experts believe the policy helped put a floor under the market, preventing an even worse slump.

Angus Macpherson, partner with Drummond Miller, added: “The very least that the Government needs to do is extend the freeze further into 2010. So far the freeze has helped to provide some stability in the Scottish property market, but the rest of the UK is still in a volatile state.

“It may even be an idea to extend the threshold even further by making all properties up to £250,000 exempt from Stamp Duty. This would provide an extra shot in the arm for the property market and encourage even more people back into the market, which in turn would help stimulate activity across the entire property spectrum.”

The ELPG was set up in 2002 with the aim of strengthening the members’ position as the main players in the Edinburgh and Lothians property scene. The firms currently account for more than a quarter of all sales in the ESPC. The ELPG enjoys a high media profile and positive headlines thanks to a Scottish PR strategy maintained by Edinburgh public relations agency Holyrood PR.