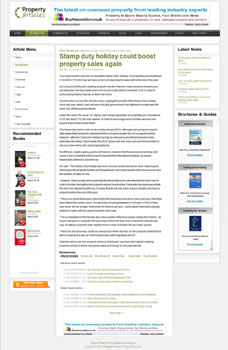 Edinburgh’s leading property solicitor Warners has received another boost to its PR in Scotland after being featured in a high-profile property news website.

Property Articles, which collates news about the UK’s housing sector, ran a story about how Warners had advised that the Stamp Duty re-introduction would create a “winter warmer” the Lothians’ property market.

The call came after Chancellor Alistair Darling announced that the Stamp Duty freeze on properties priced between £125,000-£175,000 would end on January 1st 2010. Warners estate agency partner Scott Brown said that decision would encourage more people to enter the property market before the New Year, in the hope of beating the tax.

The full story appeared in Property Articles and was the result of a Scottish public relations campaign maintained by Holyrood PR PR in Edinburgh.