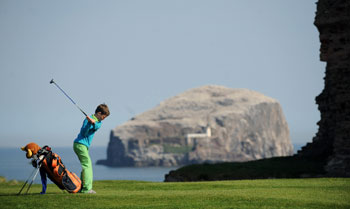 The UK’s biggest golfing tournament is set to be staged in Scotland this summer – and it isn’t the Open Championship.

Although all eyes will turn to St Andrews this July to watch the professionals do battle on the famous links, almost 500 players will be descending on the UK the month before  to compete in an equally prestigious championship.

The U.S. Kids Golf European Championship, being staged from June 1-3, will see many of the best golfers from around the world travel to East Lothian for a three-day competition across four historic golf courses.

The event, now in its third year, will be the largest single-field tournament in the UK during 2010, with a roster of competitors almost four times bigger than the Open Championship.

And the standard of golf on display at the tournament will be just as impressive as during the St Andrews showpiece – as many of the young European Championship competitors are hotly-tipped to become Major-winners of the future.

The competition has been organised by the American-based U.S. Kids Golf Foundation, which provides opportunities for children across the world to learn and play golf.

Youngsters from the age of six and – for the first time – up to the age of 18 will be challenging for the various age group European Champion titles at the tournament, which aims to promote the sport to kids and their families, as well as giving young players the chance to forge lifelong friendships through the game of golf.

Dan Van Horn, President and founder of U.S. Kids Golf, said: “We’re looking forward to once again staging the U.S. Kids Golf European Championship in Scotland. With a field of more than 450 competitors, it will be the biggest tournament taking place in the UK in 2010 – even surpassing The Open Championships.

“Many of the players at the European Championship are already rising stars of the game and the standard of golf at the tournament is always extremely high.  All of these youngsters will be going on to become at the very least competent golfers, but possibly even the Rory McIlroy’s of tomorrow.

“We’re also very pleased that, despite the ongoing challenging economic conditions, there are still youngsters from around the world who are making the trip to Scotland for this year’s tournament. It means that we will have another multicultural event that will help promote the game of golf and nurture the next generation of players.”

PR in Scotland for junior golf

The top finishers in each category will then compete in the Van Horn Cup over Gullane No 1 – a showpiece event, modelled on the Ryder Cup, where the best European players are pitted against the top non-Europe golfers.  The top five finishers in each age and gender group will automatically receive an invitation to the U.S. Kids Golf World Championships at Pinehurst Golf Club, North Carolina, in August.

This year’s competition has been expanded to allow 15 to 18-year-olds to compete for the first time, and it is hoped that this will encourage even more entries from budding junior golfers across the globe.

Tournament Co-ordinator Alasdair Good, Head Professional at Gullane GC, said: “2010 is a big year for golf in Scotland, especially with the Open Championship taking place at St Andrews.  However, in terms of the overall number of entrants, the U.S. Kids Golf European Championship will actually be the biggest tournament taking place in Scotland – and the rest of the UK – this year.

“We’re going to see some of the world’s best young golfers in action over four days and the standard will be exceptionally high. I’ve no doubt that we could even see a few Major winners of the future among the field of competitors and I’ll guarantee no one will be disappointed at the golf they will see.”

The Foundation is the charitable branch of U.S. Kids Golf – the world’s largest producer of junior golf equipment for ages 14 and under. The firm has pioneered the development of golf clubs for young players, eliminating the problem of kids using heavier, cut-down adult clubs which often hurts developing swings and discourages budding players.