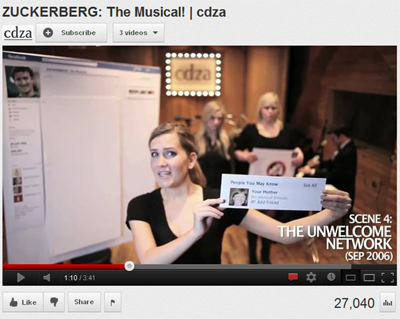 What did you think of the immortalisation of Facebook in song? Are you one of the 100,000 YouTube users that have watched the Evening News Go East video yet? Let us know your thoughts on our Twitter or Facebook pages!

Ahead of Facebook’s much anticipated monster floatation on the Nasdaq on Friday, the social network’s journey from Harvard Dorm room experiment to billion dollar enterprise has been immortalised in song.
CDZA, a band of talented individuals who reveal history through musical theatre, have chronically documented Zuckerberg’s incredible journey in a musical entitled, ‘Zuckerberg: The Musical’.
It includes such lyrical gems like, “bet your bottom dollar you’ll get stalked on timeline and “anything you can like I can like better” to the tune of Westside Story and Annie Get Your Gun.

For as long as I can remember I have always loved watching animal documentaries – something which probably came from watching The Lion King on repeat as a child! So I was in my element when I came across these photos of a hippo being preyed upon by two lions. As harrowing as it is to see the poor hippo be overpowered by the lions, the photographer has done an amazing job to capture such fascinating images that depict the realities of the animal kingdom.

Many companies are using their high profiles to help raise some much needed funds for breast cancer and Ford is no exception. ‘Models of Courage’ campaign was set up by the American car giant and is designed to demonstrate goodwill and raise awareness of breast cancer. What is great about this specific campaign is that since it was started 18 years ago it has raised $115 million dollars. I think that long lasting campaigns like this do help and definitely work towards building an extremely strong brand with excellent CSR activities. It is not enough to do a campaign like this once and Ford are an example of why brands should be proactive in keeping charity campaigns ongoing.

An article in the Guardian online this week describes how the Education Secretary Michael Gove has been sending out copies of the King James Bible to British state schools. Although the expense is covered by donations I can’t help but agree with the vast majority of comments from Guardian readers who believe this money could have been far more beneficially spent. Vital disciplines such as History, English and Science are screaming out for textbooks, sporting and art equipment seem always to be in short supply; yet what state school’s really need are bibles? In my opinion Michael Gove needs to seriously re-assess his priorities.

Everyone in Edinburgh is preparing for the biggest cup final to happen to the capital since 1896. Hibs versus Hearts is sure to separate the city come kick off. Friends will soon turn to foes, and families will be divided on the sofa watching the eagerly anticipated final. Everyone in the city has been getting onboard with promoting the final with photo calls being held all over the city and the players and managers popping up on our TV screens at any possible moment.
One company in the capital seems to have topped everyone’s ideas by creating a video. The Edinburgh Evening News, helped by a video team and song writers, have re-created the Pet Shop Boys hit ‘Go West’ with their rendition called ‘Go East’. The video is not just about the ‘salt and sauce final’ as it is being called but also about how no Glasgow team is in the final and Edinburgh is running rampant on this year’s final. The video has nearly reached 100,000 views in just under a couple of weeks and has been spoken about all over Facebook and Twitter. Hats off to the guys for the video.