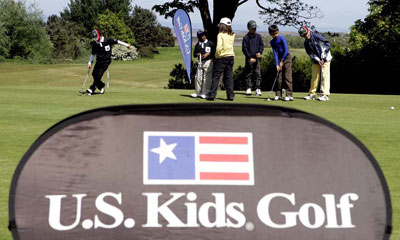 Competitors from no less than eight different countries – including the small central American nation of Guatemala – scooped European Championship titles, reflecting both the growth and spread of junior golf throughout the world.

Best round of the tournament was the last round, seven under par 65 carded by Philipp Matlari from Germany in the boys 12 age group while Liverpool’s Eloise Healey, Samantha Fuller from Kingston-upon-Thames and Monet Flores (Guatemala) each won their third European title in a row.  Frank Olav Garber (USA) also retained his European Championship crown.

But the highlight of the championships was the three holes-in-one scored by Kristjan Vojteh Berkelca, Lucy Walton and Lewis Reid over three different courses.

The competition – played over Gullane No. 2, Gullane No. 3, Craigielaw Golf Club and Longniddry Golf Club – was organised by the U.S. Kids Golf Foundation, which aims to promote the game of golf to young players and their families around the world.

Dan Van Horn, president of the U.S. Kids Golf Foundation, said: “This has been a great event which has showcased the very best junior golf from around the world.

“Typically, the weather conditions changed frequently during the week but for the most part the players basked in excellent sunshine – with some dazzling golf being played to match.

“We seen some superb scoring, with a number of sub-par rounds, but the undoubted highlights have been the three holes-in-one.  There will be many golfers who will go a lifetime without getting anywhere near a hole-in-one, but three kids have shown them how to do it.  It just really reflects the quality and emerging talent that exists among the young golfing stars of the future.

“The U.S. Kids Golf European Championship was designed to help young players bond and enjoy their time together on and off the course. Although they’re competing against each other, it has been wonderful to see so many young players form new friendships during their time in East Lothian.”

Overall, the UK recorded the highest number of individual winners with strong performances from Italy and Germany.

Robert Prior, from Weybridge, Surrey, and Italy’s Marisol Doglioli won the boys and girls oldest age groups. Prior closed with two under par 69 on Gullane No 2 to take the 15-18 years title with a 54-hole aggregate of 214, beating fellow Brit Tom Bayliss, the overnight leader, by three shots It was a British 1-2-3 as Jamie Savage trailed in third spot by on shot.

Doglioli, also playing on Gullane no 2, won by six shots from French girl Alexandra Noeuveglise – her closing 77 giving her a total of 226.

The top finishers in each category competed in the Van Horn Cup over Gullane No 1 – a showpiece event, modelled on the Ryder Cup, where the best European players are pitted against the top non-Europe golfers.  The European team won 13-0, winning the trophy for the third year in a row.

The tournament’s courses are modified for each age group in order to provide the same level challenge, meaning holes are progressively shorter as the age groups get younger.  It ultimately allows the players to reach the greens in the same number of strokes as the top pros on the PGA tour.

The Championship, which is now in its third year, is one of the highlights of the world’s junior golf calendar – with the event also outstripping the Open at St Andrews as the largest tournament being held in the UK in 2010.

Around 500 players – up more than 100 from last year – from around the world, including   Venezuela, India, Panama and Thailand, competed in East Lothian for the individual European Champion titles as well as for places at the U.S. Kids Golf World Championship in Pinehurst later this year.

The event is expected to bring in an additional £3 million economic boost to Scotland, due to many of the international players bringing their entire families overseas to watch them participate in the competition.

Alasdair Good, tournament co-ordinator and head PGA professional at Gullane Golf Course, said: “The standard has been excellent this year and we’ve been very impressed with the way that these young players have performed.

“It’s always very pleasing to see the excellent golf offering in East Lothian take centre stage in such a major tournament like this and judging by the comments we have received from children and parents it’s clear the region has given a very good account of itself.”

The U.S. Kids Golf Foundation was launched in 2001 to provide opportunities for kids to play and learn the game through local tours and tournaments. Since holding its first tournament in 2000, the U.S. Kids Golf Foundation now runs some 400 events each year with 2009 World Championships – the largest and most prestigious golf tournament for kids in the world – attracting more than 1,200 players for the second year in a row.  A Teen World Championship for golfers ages 13-18 is also now being staged, attracting an additional 450 golfers.

A full list of all scores is available on this link: http://www.uskidsgolf.com/eng/europeanChampionship/redirect.cfm?sectionID=b2c/tournaments/tournamentResults.cfm&age_group_id=25&type=EC&location_id=3522&tournament_id=779

Press release issued on behalf of US Kids Golf Foundation as part of a successful PR and social media campaign carried out by the Holyrood PR.