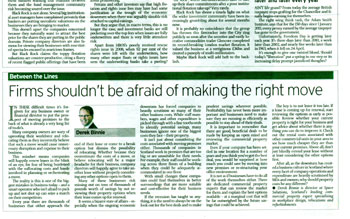 PR in Scotland for space experts

Scotland’s top commercial property firm Space Solutions has warned companies thinking about growing their influence in Scotland in 2011 to review their property leases before making any other decisions on their business strategy.

The firm said that companies should review their lease options to see what savings they can make to their operations, rather than committing to an expansion in their current commercial premises.

Director Derek Binnie told The Scotsman that firms across the country were often settling for premises that are unfit for purpose and that many companies did not realise that they could make huge savings by moving into a new base. He added that many MDs incorrectly think that they already have the best deal on their office space, or else think that the costs of relocating are far higher than the savings they could make by moving office.

The full article can be read on the Scotsman website and was the result of a sustained public relations campaign maintained by Holyrood PR PR in Scotland.