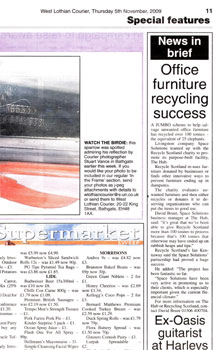 Staff at workplace design expert Space Solutions have been celebrating after receiving a piece of high-profile coverage in West Lothian’s weekly newspaper.

The firm was featured prominently in the West Lothian Courier, which reported about how a successful recycling project had been carried out at The Hub – Space Solutions’ base in Livingston.

The company has been working in partnership with Recycle Scotland over the past year in a dedicated drive to improve recycling in its West Lothian division. So far the project has helped recycle more than 100 tonnes of equipment at the facility – the equivalent to 25 fully grown elephants.

The full article appeared in the West Lothian Courier and was the result of a dedicated media campaign carried out by Holyrood PR PR in Scotland.