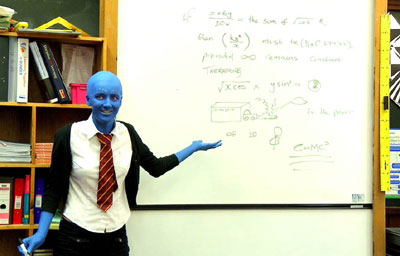 Young people in care in Scotland now have a new ambassador for their rights – Sid the alien.

Sid is taking part in the Meet Sid campaign being pioneered by the Care Commission, the body that regulates all care services in Scotland, as a way of highlighting to youngsters in care the standards they are entitled to expect.

Sid is a concept dreamed up by a group of young people in care who wanted to express how it feels to live in a care environment. They described how living in care can be like living on another planet and that they often felt they did not understand the National Care Standards.

The Care Commission worked with advocacy group, Who Cares? Scotland to bring Sid to life and is now using him as a way to promote the National Care Standards to younger people living in care because the standards should be understandable to everyone – even an alien landing on earth for the first time. The project was funded by the Scottish Government.

Sid has his very own website, which features a number of short film clips showing him trying to understand and adapt to life on a new planet while living in care.

It also features a section dedicated to Scotland’s National Care Standards, which outline what youngsters are entitled to expect from a service if they are taken into care including a right to dignity, privacy and choice.

Ronnie Hill, director of children’s services regulation at the Care Commission, said: “Sid is a great concept from the minds of youngsters in care and is borne out of their view that the National Care Standards are often not understood.

“It is very important that young people are aware of their rights and know what they are entitled to and the Meet Sid campaign is designed to make this information more accessible to them and easier to understand.”

The video section on the website – http://www.meetsid.co.uk/ – features Sid trying to come to terms with even the simplest day-to-day activities such as buying lunch, crossing the road and going to school.

There is also a section on the site for youngsters’ stories and feedback, which will be moderated by a young person from Who Cares? Scotland.

One of the young people involved in the group, Donny, said: “I think it’s a great idea. I never really understood what the National Care Standards were about, I knew they were there but just not what they were for, but I know now.

“I think the website is really good and helpful and it will help young people understand about the Care Standards. I really enjoyed being part of it. I gave ideas during the group work sessions and then I did the voice over which was fun and interesting because I got to learn something too.”