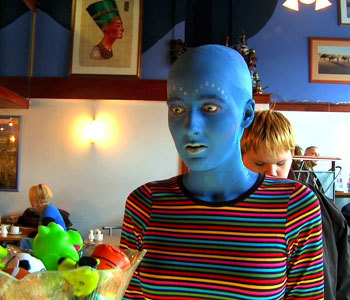 A blue alien designed by Scotland’s care watchdog to help youngsters understand the standards of care they should be receiving has become a worldwide internet hit.

Sid the Alien has proved popular with thousands of people across the globe who have been viewing his www.meetsid.co.uk website or even adding him as a friend on social networking sites such as Facebook and Twitter.

Sid was a concept dreamed up by a group of young people in care who wanted to express how it feels to live in a care environment.  Sid’s rationale was based around the fact that the standards should be understandable to everyone – even an alien landing on earth for the first time.

The Care Commission worked with advocacy group, Who Cares? Scotland to bring Sid to life and has been using him as a way to promote the Scottish Government’s National Care Standards for younger people living in care.

However, although the campaign was intended to target youngsters in Scotland, the initiative has now been seen by people across the globe including people in Azerbaijan, Sweden, the United States, New Zealand and Russia.

Karen Anderson, Communications and Involvement Manager with the Care Commission, said: “We’ve been overwhelmed with the success of Sid the alien since the Meet Sid initiative was launched earlier this year. We knew he would be popular with young people, so we put adverts across the most popular social networking sites young people use to communicate with each other – such as Facebook, Bebo, Hi 5, Friendster and My Space – in order to get them to see the Meet Sid website.

“However, we’re delighted that he has proved a success with people outside Scotland. Sid now has hundreds of Twitter followers and Facebook friends from around the world and we are hoping to receive even more in the near future.”

The video section on the website features Sid trying to come to terms with even the simplest day-to-day activities such as buying lunch, crossing the road and going to school.

There is also a section on the site for youngsters’ stories and feedback, which will be moderated by a young person from Who Cares? Scotland.