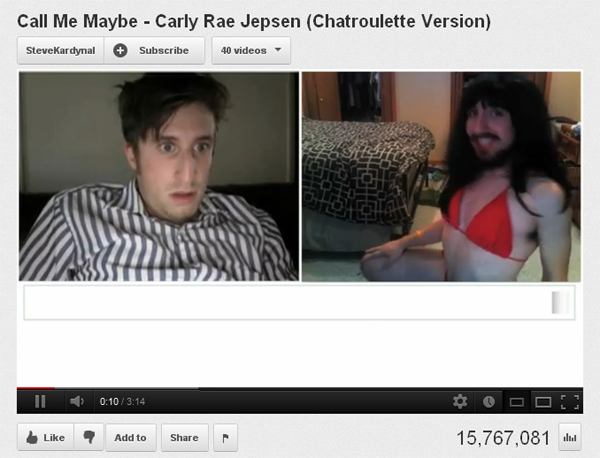 If today’s offering made you chuckle, gasp or grimace – please let us know on via Facebook or Twitter!

For those unaware of Chatroulette, Wikipedia offers its overview: “…an online chat website that pairs strangers from around the world together for webcam-based conversations. Visitors to the website begin an online chat (text, audio, and video) with another visitor who is chosen at random. At any point, either user may leave the current chat by initiating another random connection.”
What happens when a man pops on some make up and a bikini and dances around to ‘Call Me Maybe’ whilst people are randomly watching it? This video is what happens. With over 13 millions hits already, it is perhaps one of the cleverest online videos I have seen for a while. I love the reactions to the onlookers who believe they are watching a girl in a bikini dance only to see it is a man…with a beard. Have a watch
http://youtu.be/YCiY1y3uJ3o

For those who think video games can be too extreme on the violence side, then you aren’t going to like Google Street Shoot!
Advertising agency Pool Worldwide has mashed together Google Street View and a fake assault rifle to create ‘Google Shoot View.’
Feel enraged recently by any local spats? Taking a rifle and blasting away a la Call of Duty might just ease the tension!
Check out the game play video which shows just how realistic it looks-but violence isn’t always the answer kids
http://www.youtube.com/watch?v=DlOveL_HFJo

The discussion about funny place names isn’t a new one; however, this made me laugh this morning so I’m going to write about it. After a poll was carried out to find Britain’s most unfortunate place name, the village of Shitterton has been given the crown. It was a close run thing for first, second, and third place, but Shitterton came out on top. Other funny place names included: Crapstone, Brokenwind and Pratts Bottom.
http://www.huffingtonpost.co.uk/2012/08/15/shitterton-crapstone-brokenwind-top-britains-worst-place-names-survey_n_1777915.html?utm_hp_ref=uk-comedy

It was announced last week that Robert Pattinson was to embark on a promotional tour for new movie Cosmopolis, starting with an appearance on Jon Stewart’s The Daily Show.
The recently single Twilight hunk was forced to come out of hiding after his girlfriend’s Kristen Stewart’s affair was rather humiliatingly exposed by the media.
His appearance on the Daily Show was highly awaited – and it was thought that his publicists would ensure his interviewers steered clear of any mention of his recent heartbreak.
When the show aired, it became evident that there was no intervention of publicists, and Jon frequently referred to his heartbreak, offering him a tub of Ben & Jerry’s to eat away the pain.
Watch the awkwardness below – and the next step is a promotional tour with the harlot in question in the coming months to launch the new Twilight movie.
http://www.huffingtonpost.com/2012/08/14/robert-pattinson-publicist-kristen-stewart-daily-show-video_n_1774743.html?ncid=edlinkusaolp00000009 ​

So, he may have stepped down as head of Microsoft in 2008, but Bill Gates was never going to be one who let himself get out of world-changing innovation loop. This week Mr Gates hosted the Reinvent the Toilet Fair in Seattle, Washington. The event showcased the designs and working prototypes of eight design finalists who followed through on his August 2011 challenge to reinvent the toilet. The trick was to create a product that could function without water pipes. To see how successful the final designs were, follow the link below.
http://mashable.com/2012/08/16/bill-gates-reinvent-toilet-fair/​