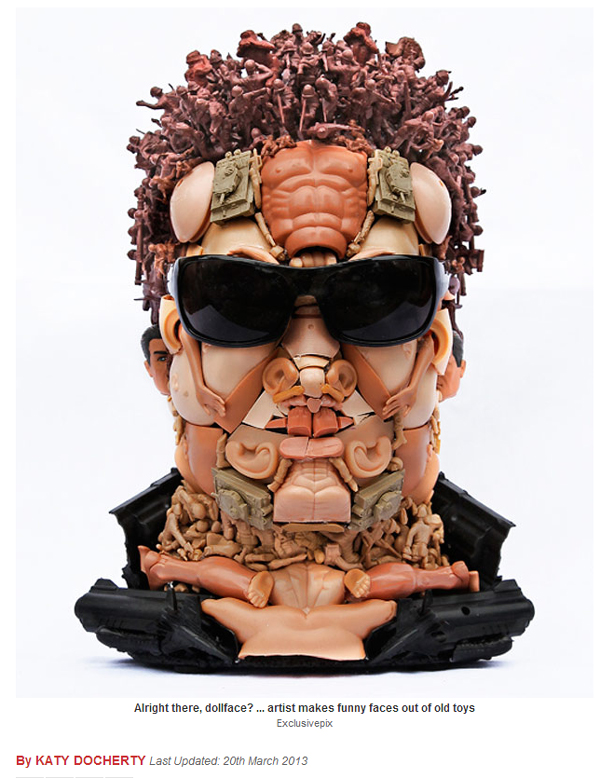 Think you might have your mitts on a Holyrood Five worthy of a broadcast? Get in touch via Facebook, Twitter,Linkedin or Google +

I used to think Lego was pretty impressive when I was younger, especially when you would visit Toy Shops and see the gigantic structures the shop assistants would make. That was until I saw this artist. Eco-friendly Freya Jobbins has been inspired by the Toy Story films to use thousands of doll parts to create amazing funny faces of different celebs and characters, including the Terminator and Barbie. Although some of them are a tad creepy, the way she uses dolls feet for teeth or tiny soldiers as hair is so creative and is a good way to recycle old, unwanted toys.
http://www.thesun.co.uk/sol/homepage/news/4849763/Sculptor-uses-doll-parts.html

NOT A MORNING PERSON (Sarah)

As I rarely even take the bus, let alone carry out a lengthy train commute each morning, I am not overly familiar with the type of fellow passengers you can expect to see. That said I can imagine the occasional homeless person, odd late night/early morning reveller and an abundance of office types is the norm. Not a brown bear. The below link to a viral video shows a brown bear lunging at a Siberian passenger train, a sequence captured by a passenger on his phone. According to the Huffington Post’s blurb the creature could have been being taunted by passengers. Even still, he obviously hadn’t his coffee yet.
http://www.huffingtonpost.co.uk/2013/03/19/siberian-brown-bear-claws-window_n_2908072.html?utm_hp_ref=uk-viral-videos

You’ve come home from a long day at work and you’re asked how your day was. Your response is a strange one: “It was good and in my lunch break I scaled Kilimanjaro.”

Sounds a bit weird but it is possible with Google Maps who have added some stunning images in a special collection of places you may never get to see in your lifetime. So if you’re too busy to go to Kilimanjaro, then get on Google Maps and see what all the fuss is about. Be warned, I lost my bearings while I was “scaling” on Google Maps, so maybe it’s good that I’m not doing this for real.
http://mashable.com/2013/03/18/google-maps-mountains/

TEST DRIVE TO THE MAX (Aoibhínn)

The most recent stunt from Pepsi MAX has seen their latest YouTube advert blow up with almost 30m views in just over a week Undercover Nascar driver Jeff Gordon dons a cunning disguise and takes a Camaro sports car for a test drive with petrified car salesman, Steve in the passenger sear. The usual debate on whether or not it was really a prank pursued, but who really cares, great commercial and Steve’s feminine whimpering is really what makes this video, phony or not.
http://www.youtube.com/watch?v=Q5mHPo2yDG8

Sea Lion on the Loose! (Rebecca)

This sea lion managed to crawl its way out of the water in the beach resort of Balneario Camboriu in the southern state of Santa Catarina in Brazil. Members of the public were shocked to see this colossal creature waddling across the road. Not a sight you would expect to see in the middle of main, busy boulevard that’s for sure! It was returned to the beach resort safe and sound.
http://www.telegraph.co.uk/news/newsvideo/weirdnewsvideo/9941228/Sea-lion-crosses-busy-road-in-Brazil.html