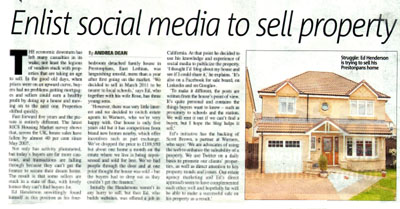 Although the economic downturn has slowed the Housing Market substantially, home owners looking to sell their houses are not out of luck. Though buyers are more cautious, they are still looking, and often the solution comes with simply finding the right match.

Home owner Ed Henderson found himself in a state of flux, and after being offered a Job in California, he decided it was time to change tactics. He switched estate agents to Warners, and showed the listing on Facebook, his blog, LinkedIn and Google+. The method he used was backed by Warners, who are avid supporters of social media.

Scott Brown, a partner at Warners said: “We are advocates of using the web to enhance the saleability of a property. We use Twitter on a daily basis to promote our clients properties, as well as direct attention to key property trends and issues.

“Our estate agency marketing and Ed’s direct approach seem to have complemented each other well.”

Warners solicitors and estate agents, sold 166 residential properties throughout the first three months of the year, compared to just 151 sales made during the same period the previous year. Sales are also equally up by 9% compared to the last quarter of 2011 – an indication of continued stability and growth in the Scottish property market.

This coverage can be viewed in full on the Metro website and was achieved as part of the ongoing PR campaign by the Holyrood PR on behalf of Warners.