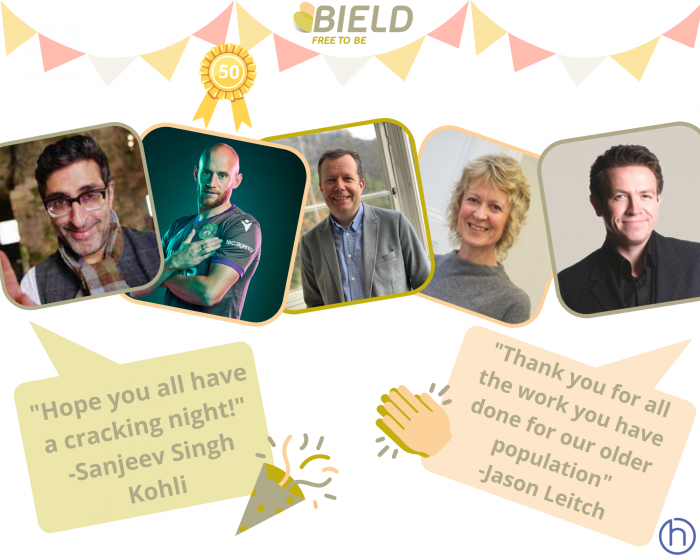 WHEN our social care PR team heard that Bield Housing and Care was celebrating its 50th anniversary of operating in the sector, we knew it was time to go big or go home.

To help make the celebrations extra special, the HPR team worked their magic to secure five personal messages from well-known Scotland’s celebrities as part of Bield’s ‘Big Night In’.

The Big Night In was held on 17 March to commemorate 50 years of providing vital housing services to individuals across Scotland and was documented with a celebratory video which people could log on to watch form the comfort and safety of their own home.

Bield’s 50th anniversary is a huge milestone and will be celebrated throughout 2021. The team at Holyrood PR put their heads together to come up with a list of Scots to reach out to for messages of support and congratulation to include in the Big Night In video.

From there, the team reached out to multiple individuals with tailored messages to gauge interest and began liaising with multiple talent agents and personal assistants.

To our delight, we secured five video messages (all free of charge) congratulating Bield on its milestone, to be used as part of the Big Night In.

The Holyrood PR and Bield team were delighted with these results and appreciated the individuals taking time to help commemorate this milestone.

Receiving a message from Jason Leitch was huge achievement as he has been such a prominent figure in Scotland throughout the Coronavirus pandemic. Similarly, the recognition from Sally at SFHA was very meaningful to staff and residents at Bield.

Mark Cox and Sanjeev Singh Kohli were two familiar faces that customers and staff at Bield have laughed along with in popular Scottish TV comedy Still Game, and Hibernian Captain, David Gray is well known among football fans as the legend who scored the winning goal in the Scottish Cup Final 2016.

These messages added some light-hearted fun as the video took a trip down memory lane and looked towards the future. All of the messages were a surprise and it helped to make the celebration special despite challenges and restrictions from COVID.

Although Bield may have been unable to celebrate this milestone quite like they would have liked, the celebrations will continue throughout the year and bringing everyone together virtually in the safest way.

You can watch the Big Night In here.

Want to find out how our social care PR can help you?

Getting in touch with our team of social care PR experts couldn’t be easier. Simply give us a call on 0131 561 2244 or take a few minutes to fill in the form below and one of our social care PR team will get straight back to you: