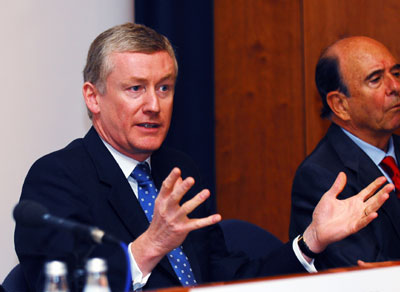 As we are seeing with Fred Goodwin, it can even turn into the kind of mightily destructive whirlwind no-one ever wants to reap.

But fickle by its very nature means flighty. Public opinion is as changeable as the wind.

How then, do we explain away the kinds of sustained and immovable hate fest that has characterised the Goodwin affair?

The British public may well be disgusted by the morally bankrupt and grasping-to-the-end antics of the failed financier. I suspect most who saw his sham apology to a parliamentary select committee also felt there was no hint of genuine remorse.

Reprehensible though Goodwin is, he’s just one man.

Scotland has two collapsed banks. Which means you don’t have to go far to find a motley collection of soiled money men, all of whom were complicit in the destruction of 300 years of fine banking heritage – all of them are unfeasibly wealthy as a result.

What then sets Fred so very apart in the crucible of public opinion? Or should that be who?

Let’s be absolutely clear: someone dexterous and skilled has been working in the shadows and with Machiavellian precision they’ve slit the protective cocoon of wealth and power Goodwin would normally have enjoyed.

Then they’ve turned it inside out and forced Sir Fred to wear it as the banking world’s most spectacular ever hair shirt.

Some commentators would have it that the once glorious knight of the realm has been felled by an unholy trinity of Gordon Brown, Alistair Darling and Lord Mandelson, desperate to deflect attention from Labour’s handling of the economy.

However, I’m more inclined to believe what several wee birdies tell me  – that The Shred has in turn been shredded by an altogether more accomplished eminence grise.

Jack Irvine is the man with exactly the kind of credentials that could ensure every media outlet in the country turned on Fred Goodwin at exactly the same time. A Scottish newspaper legend, crisis management is Mr Irvine’s speciality these days.

If industry whispers are to be believed, then Fred the Shred’s been done over by Jack the Ripper.

Certainly someone appears to have turned the Royal Bank of Scotland’s drama into Fred Goodwin’s crisis. What surer way to give the new management team at RBS a clean slate?

After all, toxic assets aren’t all financial. Someone wrapped up the bank’s reputational bad debts then slipped them into Fred’s wallet along with his obscene pension – and before he could disappear into the sunset that same someone pointed out the impressive bulge in the banker’s inside jacket pocket.

Whether the masterstroke is ever officially credited to Jack Irvine remains to be seen.

Frankly, I’m sure he’s not too bothered – there are plenty of other national hot potato issues keeping him busy including the Royal Mail takeover, the MG Rover Inquiry and even the Barry Ferguson affair.

As the great man himself points out: “In fact I’ve just realised I have barely played a game of golf in the past three months. Quel tragedy.”