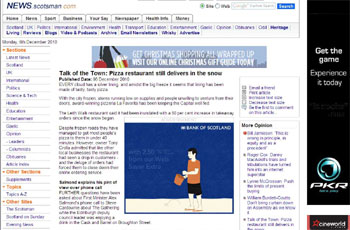 Edinburgh’s most popular pizzeria has received a PR in Edinburgh boost after being featured in the city’s evening newspaper.

The Edinburgh Evening News reported on how La Favorita staff had braved the winter conditions to ensure that pizza lovers in the city continued to receive fresh takeaways at their door.

La Favorita owner Tony Crolla told the paper that takeaway orders had increased by 50% since the snow chaos began, and his staff had worked tirelessly to ensure that pizza deliveries reached their destinations on time.

The coverage can be viewed on the Evening News website and was the result of on ongoing public relations campaign carried out by Holyrood PR PR in Scotland.