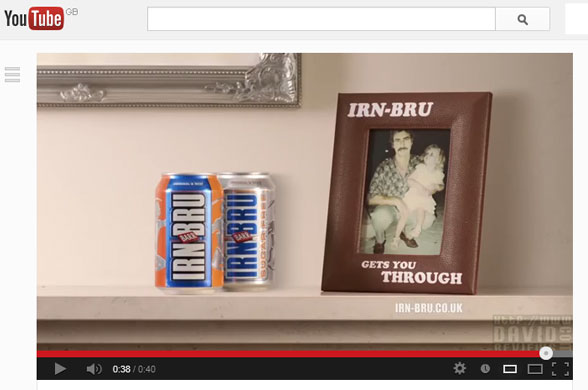 Irn Bru have cranked up the LOL’s in their latest ad for Scotland’s national soft drink.
What’s the worst thing a Scottish dad could experience when his daughter brings home a new boyfriend? Think of the very worst thing…yep you’ve guessed it he’s English!! A walking cliché of the archetype of  Englishness, the new fella who speaks the Queens English, dressed in the England strip and has a dog called Wembley…but you ken what they say “Irn-Bru…Gets You Through”.
http://www.youtube.com/watch?feature=player_embedded&v=yP_OJRrR0_Q

NO ARM? NO PROBLEM (Melissa)

If your having a bad day, why not have a look at these optimistic tips that will help you realise it’s not all doom and gloom. From the usual glass half full to creative solutions for you if your arm ever gets bitten off, this top 20 helps you realise it’s really not that bad. There’s also a few funny animal clips in here, which, let’s face it, brightens up anyone’s day and gives you something to have a good chuckle at.
http://www.buzzfeed.com/geico/20-ways-you-know-you-are-an-optimist

Nobody likes to look at a dirty nappy, especially if it doesn’t even belong to your own child. An American dad has played the ultimate prank on a friend who reacts violently to merely being in the same room as one and it’s all captured on Youtube.
He covers a clean pampers nappy in his wife’s homemade chocolate pudding and edges closer and closer to his unfortunate pal who has no idea he is the victim of a prank much to the amusement of the audience. His reaction is hilariously genuine and when his hand is forced inside the nappy, he looks like he is about to cry – until he smells that is it chocolate.
http://youtu.be/tTiZD7gzIlw

SHOWDOWN OF THE SITCOMS (Aimee)

Flavorwire pointed out that you may have been tuning into Vulture’s Ongoing Sitcom Showdown and whilst respectfully The Simpsons came out top, it completely ignored the best of the British.
I might be slightly bias in saying our dry wit, satire and parody often outclasses those made stateside. I think this is blazingly obvious when watching carbon copies of UK sitcoms sold across the Atlantic like Office US which for me, completely missed the mark.
Flavorwire has compiled a list of 12 of the best and even slotted in some classic best bits starting off with Absolutely Fabulous which failed twice stateside.
http://flavorwire.com/378191/the-12-best-non-us-sitcoms-of-the-past-30-years

Whether you over spend, want to start living on a budget or are looking on how best to invest some cash, your social media platforms can help you. By following financial experts on twitter and platforms like Google+ and LinkedIn you can have access to a nearly constant stream of tips and advice. Mashable.com has created  alist of some of the top people to follow, so if money matters are high up your to do list, check out the link below.
http://mashable.com/2013/03/18/personal-finance-experts-twitter/