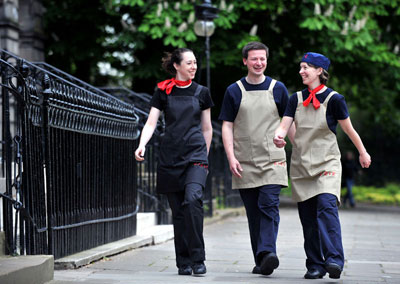 NKD Clothing has designed a range of outfits for one of Scotland’s most hotly anticipated restaurants which opened this week (Wed, May 20).

Designers at the Edinburgh based corporate couture firm were asked to come up with a bespoke look for both the kitchen brigade and front of house team at Michelin starred chef Paul Kitching’s new restaurant, 21212.

Paul and his partner Katie O’Brien wanted a look which would set them apart from other high-end restaurants and sourced a traditional artist’s smock as the basis for the image they wanted to achieve. The proviso was to create a uniformed approach in all staff being the same and one fluid team front and back of house.

Jill Robertson, Design Manager with NKD Clothing said: “Working with Paul and Katie was exciting because they had a clear vision and the design element is vital in every aspect of their new restaurant.

“The smock look was really inspired, but the design team initially encountered challenges with the material commonly used to make smocks as it was a heavy canvas. It was uncomfortable to wear for long periods of time and too hot, especially in a kitchen environment.”

Eventually a solution was found which was not only comfortable but smart and Jill added: “Sometimes a smock can look overly casual, so we’ve also been able to come up with a far more tailored look. I was really delighted Paul and Katie liked it so much and that we’ve managed to remain true to the ‘working artist’ look.”

Front of house staff will wear a bespoke, artist-style apron with straps which cross over at the back and deep front pockets in a sand-coloured canvas-effect fabric. Female staff will also wear a poppy-red silk neck scarf, while male colleagues will have the restaurant logo picked out in red on their apron.

Staff working in the kitchen will wear a longer, mid-calf apron with straps which pass fully around the waist to tie at the front, skull cap style kitchen hats in navy blue with either the number 1 or 2 from the restaurant logo on the front. Female kitchen staff will also wear a red cotton neck scarf.

Beneath the apron all staff will be kitted out in a fitted navy blue t-shirts, navy trousers and with contemporary and comfortable black trainers.

Jill added: “I came up with two separate looks and this was my favourite, so I was really pleased when it was chosen. The decor features a lot of browns and caramels and includes Moth wallpaper by Timorous Beasties, so our designs reflect and complement the interiors.”

Based in Edinburgh’s Royal Terrace, 21212 is hotly tipped to follow Paul and Katie’s last restaurant, Juniper in Manchester, by earning a sought after Michelin star.

While the ultimate restaurant accolade reflects the quality of the cuisine, design and ambience are also important aspects.

Jill added: “The restaurant concept itself is contemporary and really unique and that allowed us to be more creative in our designs because they were open to new ideas.

“We feel it will make a real statement of individuality. Often the staff clothing in top end restaurants can be fairly predictable and that is certainly not the case at 21212.

“These uniforms will be extremely distinctive, stylish and high quality, while sacrificing nothing in terms of comfort. Staff wearing these outfits will feel as good as they look.”

NKD Clothing
Is one of the UK’s leading designers and providers of bespoke uniforms, work wear and corporate clothing. It is particularly strong in the catering and hospitality sector and has outfitted staff in leading hotel chains such as Malmaison, Hotel du Vin and Dakota.
The company has been identified by Scottish Enterprise as a potential high-growth company. Since Gill Eastgate led a management buyout in 2005 she has turned it into £1.3million a year business employing nine people in Edinburgh – www.nkdclothing.co.uk.

21212
Based at 3 Royal Terrace, Edinburgh, EH7 5AB.
The property, which has just undergone a £4.5 million restoration to bring it back to its former glory, is a four storey Georgian townhouse and includes four luxury bedrooms, drawing room, private dining room and a 38 cover restaurant.
Full details on Paul, the property and his menu can be found at www.21212restaurant.co.uk
Bookings are now being taken on [email protected]
Reservations can also be made for the restaurant and bedrooms on 0845 22 21212 02 or 0131 523 1030.