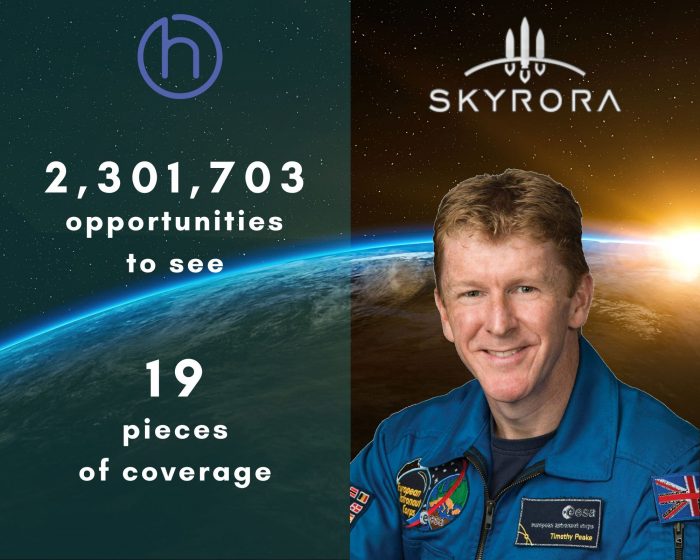 Major Peake is Britain’s best-known astronaut and became a household name when he was launched into space and boarded the International Space Station (ISS) in 2015.

We made sure he hit the headlines again when he was appointed to the advisory board of Edinburgh-based space rocket company, Skyrora. Our campaign to tell that story to the world achieved:

Tim’s experience – and the coverage his appointment delivered – are invaluable to Skyrora, as the company continues preparing the Skyrora XL rocket for orbital launches by 2023.

Following the success of Skylark Nano, the space rocket company proved just how serious their ambitions were with the appointment to its Advisory Board of Major Peake, an experienced European Space Agency astronaut, former International Space Station (ISS) crew member, and British Army Air Corps officer.

Skyrora is one of the most exciting names in the fast-growing British space sector and our tech PR experts have helped position the company as one of the best-known names. That is vital in attracting political support, recruiting the best new talent and attracting major business which need to send payloads into space.

Successful tech PR is essential in supporting Skyrora’s mission to build its foundation as a rocket launch authority across the UK.

Looking for a Tech PR agency to help your company take flight?

Our team of experts would like to hear about the opportunities for your business – and to explain how expert public relations services can help.

We’re just a phone call away on 0131 561 2244.  If you prefer emails, you can take a few seconds to fill and submit the simple form below and we will get straight back to you: