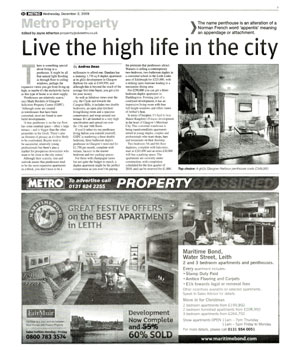 Edinburgh’s leading solicitor estate agent Warners has received another high profile piece of coverage in one of the UK’s national newspapers.

The Metro featured a range of high-end properties being sold through Warners in its most recent feature about how duplex flats and penthouses are becoming more affordable.

The UK freesheet said that, due to the ongoing recession and the fall in house prices compared to the peak figures in 2007, penthouses were no longer just in the price range of rich and influential buyers. It featured a host of affordable duplex apartments and penthouses – including some being sold through Warners – as examples of high-end affordable properties available to buyers.

The full article in the Metro was the result of an ongoing media campaign for Warners sustained by Holyrood PR PR in Scotland.