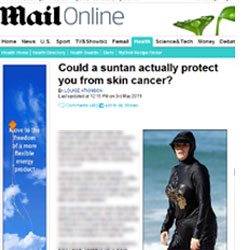 Could a suntan can be good for you?

An article featured in the Daily Mail raises the ongoing contradictions surrounding the danger of sun exposure and its implicit connection to skin cancer.  In response to Sun Awareness Week a reporter for the national newspaper posted a picture of health conscious Nigella Lawson sporting a burkini on holiday in Australia.  But are these extreme precautions really necessary?

While most dermatologists insist a suntan is never good for you, even if you do go for skin cancer screening regularly, others disagree and state that messages disseminated in the media are exaggerated and in fact a light suntan could be good for you and may even protect you against skin cancer.

Despite this it seems we are constantly warned of the dangers of sun exposure and encouraged to stay out of it at all costs but on the other side of the coin we are told that without sunlight we risk becoming vitamin D deficient.  In recent years publicity on the dangers of sun exposure and skin cancer has grown and it’s driven into us through countless articles, news stories and documentaries.

As Louisa Atkinson reports, we are told that as little as one childhood sunburn episode that results in blistering is enough to double the risk of developing melanoma in later life.  As if this information isn’t frightening enough, Cancer Research UK drive home the message with new statistics showing that malignant melanoma is rising annually by eight percent, with two people a day receiving this gloomy diagnosis.

But as the reporter suggests, are we being too precautious in our attempt to avoid sunlight?  The Daily Mail reports that the message is being softened as there the concern that the public risk becoming vitamin D deficient   which can aggravate osteoporosis in adults and rickets in children. Vitamin D has been shown to lessen the risk of other cancers, specifically bowel cancer.  Cancer Research UK advises that sun exposure is fine in moderation and recommends that we spend a few minutes of mid afternoon sunshine without UVA protection which will be sufficient enough for us to produce vitamin D.

Interestingly Sam Shuster, emeritus professor of dermatology at Newcastle University, doesn’t believe there is enough scientific evidence to prove this so we don’t know for sure and there has even been the suggestion that a tan built up gradually and sensibly could offer natural protection against malignant melanoma because it lowers the risk of sunburn.  In agreement with this is Professor Shuster who states that children should be allowed to build up gentle tan so their skin becomes more tolerant of the sun.

Overall the most important message is to simply avoid sunburn. Educate yourself on the different skin types and the action you should therefore take in accordance with yours.