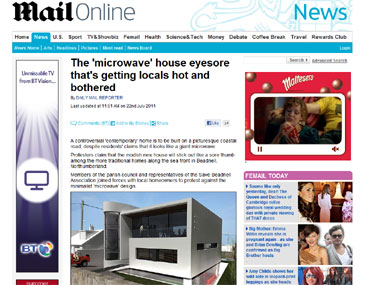 Forget the house that looks like Hitler, the latest eye sore to cause a stir from some far from friendly neighbours is this house that looks like a microwave. The modern building has been designed by home owner Stephen Miller and the local residents in Beadnell, Northumberland, have expressed their concern that the new house will be an eye sore when built next to their sea front houses and have even started their own Save Beadnell group as a result. Dubbed the microwave house because of its uncanny website to the kitchen appliance, Stephen is hoping that the house will raise the bar on the future of housing developments in the area and despite protests, the local council have approved planning permission. I think the residents of Beadnell should count themselves lucky that they haven’t got a replica of the Fuhrer on their doorstep.

THE PLUS SIDE OF GOOGLE (Scott)

Ok, so I am a a social media anorak. Which means I’m already signed up for Google+, the new social network from the search engine giant. How successful will it be? Who knows? Signs look positive though, as it has already reached 20m users in just three weeks, even though it is still in an invite-only beta version. I love it, but I’m not really a great Facebook user and still have doubts whether hardcore user of Mark Zuckerberg’s platform will switch over. What seems beyond doubt though is that Google have put ill-fated social media fialures like Buzz and Wave them and really hit the mark this time.

LOCK UP YOUR SONS, CAUSE GRANNY IS AFTER THEM (Pamela)

Ladies in their twilight years value sexual chemistry in a partner more than women in their 40s, according to a recent survey.  Apparently the emphasis women place on sexual attraction drops when they hit 40, but comes back with a vengeance when they reach retirement.  Additionally, the same survey showed that while modern younger women of today seek tall, dark, handsome men with ambition.  This is a stark contrast to what our grandmothers preferred, which was kindness, reliability and friendship.  I am confused.  Why do grans and granddads not still sleep in the same room after menopause?  This survey is inconclusive.

With the final of The Apprentice only a few days ago, some people out there may have felt inspired to design their own products just like the winner, inventor Tom Pellereau. Well, have a look at these little beauties for a little bit of extra help to get your ideas off the ground. My favourite has to be the bubble wrap calendar, although I fear the whole thing might be burst within the first week.

THE BEST WAY TO BEAT THE COMMUTE – A STATION SLIDE? (Adrian)

While hundreds of UK commuters have to deal with packed railway platforms, crowded tube stops and sweaty buses during their morning commute, the Dutch have decided to have a bit more fun with their transport needs. Taking a line from the kind of manual a six-year-old would be proud of, designers at Overecht station have installed what could be the best possible solution for rush hour pedestrians – a giant slide.

Called a “transport accelerator”, the giant slipway is designed to speed up the foot flow of passengers at the station in order to get people to their jobs quicker. But let’s not beat around the bush here. It’s hardly a revolutionary idea worthy of scientific achievement. It’s a big freaking children’s slide.

Apparently the new addition to the station has been a big hit with commuters, which surely will just exacerbate the problem of congestion rather than solve it. You’ll have the same big queues of commuters as before, only they’ll all be queuing for the slide this time. Still, it looks pretty awesome and something that Waverley Station should definitely consider investing in…