The collection of three windows had been obscured for decades and only came to light during renovation work on the Fraser Suites hotel in St Giles Street.

The central window of the trio bears the inscription Vivendo Discimvs (Latin for ‘by living we learn’) which is the motto used by Sir Patrick Geddes, who was celebrated across the world for his innovative thinking in the fields of urban planning and education.

Geddes pioneered the first residential accommodation for University students in Scotland. He believed it was an essential part of education for students to live together.

Working and teaching from the Camera Obscura Outlook Tower in Edinburgh, he developed and played a large part in much of the renovation of the Capital’s Royal Mile including the building of Ramsay Garden next to Edinburgh Castle.

Geddes was also instrumental in the design of Edinburgh Zoo and created more natural environments for the animals, separating them from the public by moats rather than the usual cages typical of Victorian menageries.

The site of Fraser Suites Edinburgh, located 12 – 26 St Giles Street in the heart of Edinburgh’s Old Town, dates back to the 1860s where it was location for the Edinburgh Courant – one of the first regional newspapers in the UK and whose editors included Robinson Crusoe author Daniel Defoe.

But it’s also known that the site housed St Giles House which was later used as student accommodation – providing the clearest link to Geddes and his pioneering work in Edinburgh.

And although Fraser Suites have been unable to discover why the stained glass panels were created, they have ensured the mystery find now has pride in place in the new hotel.

Fraser Suites Edinburgh, which is set to officially open in November, offers travellers the unique concept of 75 luxurious and contemporary rooms and suites which double up as full serviced residences. The Geddes panels are now a key feature in one of the hotel’s top of the range suites – the Princes Suite.

Fraser Suites Scottish Regional Manager Heather Gilchrist said: “When we were creating Fraser Suites we wanted to ensure that we celebrated all aspects of the heritage of the building.  It is such an amazing building so it was important that we preserved all the historical features.

“We were amazed at the various fixtures and features we found – not more so that the beautiful stained glass panels with the ‘vivendo discimvs’ wording.  They had been hidden away for years.  We’re not even sure if people knew they existed before.

“When we discovered the windows we wanted to make a feature of them – and the best place for them was to use them as the centerpiece in one of our exclusive suites.

“The windows are now on display in our Princes Suite, which has stunning views over Princes Street Gardens and the Scott Monument.

“It means that anyone staying in the room will know they are very much living and breathing an important part of Edinburgh’s history.”

John Lowrey, Senior Lecturer in Architectural History at the School of Arts, Culture & Environment at the University of Edinburgh, said: “The windows are definitely a Geddes connection if the stained glass bears the legend ‘vivendo discimvs’.

“This is the inscription Geddes put on the buildings he used as University halls of residences – it was even on the crockery in the dining rooms. The fact that the crest is similar to the University’s is a clincher because, of course, these were not actually university halls; they were simply part of Geddes’ attempt to create a collegiate enclave in the St Giles/Lawnmarket area.

“You can see the same inscription over the arch inside Riddles’ Court, which was also used as one of these halls.”

The Trail is a mile long route through Edinburgh’s Old Town where more than a hundred years ago Geddes, working with the residents and local architects, developed a method called ‘Conservative Surgery’ for the regeneration of the inner city of Edinburgh.

Isn’t it time your business was treated to the kind of powerful PR storytelling that helps our clients – like Fraser Suites Edinburgh – to stand out in a competitive market?

Get in touch with us to find out what is possible. It couldn’t be easier to contact our friendly team. Phone 0131 561 2244 or take a few seconds to fill and submit the simple form below and we’ll get straight back to you: 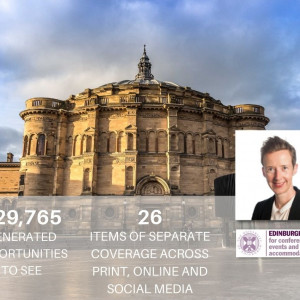 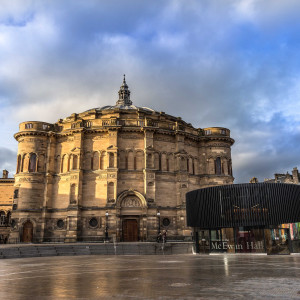