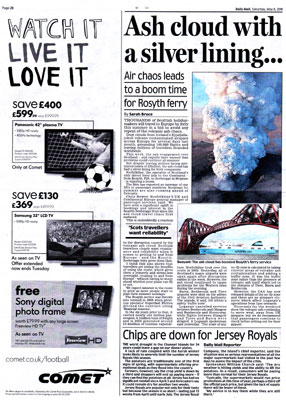 The Daily Mail has featured a story detailing Norfolkline’s boom in passengers thanks to unfortunate ash coloud which caused travel chaos for thousands of travellers.

Under the headline “Ash cloud with a silver lining” the story details Norfolkline‘s expected increase in passengers as travellers turn to the ferry to avoid any further mishaps following the volcanic ash.

Not only has Norfolkline seen an increase of one fifth of passenger numbers but summer bookings are ahead of the predicted forcast.

It states: “But despite leaving airlines facing estimated losses of of two billion, the ash cloud has had a silver lining for ferry companies.”

As Scotland’s only direct ferry link to Europe, Norfolkline’s Rosyth to Zeebrugge ferry recently celebrated its first birthday after shipping thousands of holiday makers to their holiday destinations.

The full article was featured in The Daily Mail newspaper and was secured as part of a successful public relations campaign carried out by the Holyrood PR.

Tech lessons blossom for pensioners thanks to floral app