on behalf of Care Inspectorate 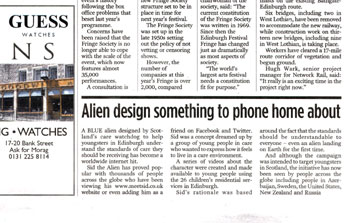 Sid the alien, the Care Commission’s latest initiative to help youngsters in care across Scotland, has been featured in the news pages of the Edinburgh Evening News.

The newspaper reported on how the online character had proved a hit with people from across the globe who were looking for more information about care standards for youngsters in Scotland.

Meet Sid was a concept dreamed up by a group of young people in care who wanted to express how it feels to live in a care environment.  Sid’s rationale was based around the fact that the standards should be understandable to everyone – even an alien landing on earth for the first time.

The Care Commission worked with advocacy group, Who Cares? Scotland to bring Sid to life and has been using him as a way to promote the Scottish Government’s National Care Standards for younger people living in care. However, although the campaign was intended to target youngsters in Scotland, the initiative has now been seen by people across the globe including people in Azerbaijan, Sweden, the United States, New Zealand and Russia.

The full coverage appeared in the Edinburgh Evening News and was the result of a dedicated media strategy implemented by Scotland’s PR experts the Holyrood PR.