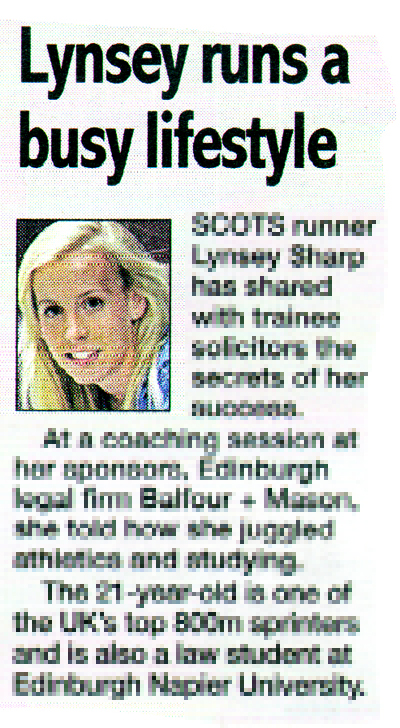 An Edinburgh based law firm this week welcomed scottish athlete Lynsey Sharp to give a motivational talk to it’s trainee solicitors.

Lynsey Sharp whos is one of the UK’s top 800m sprinters has been sponsored by law firm Balfour + Manson since the age of eleven. She is also a law at Edinburgh Napier University.

During a special coaching session for a group of trainee solicitors at legal firm Balfour+Manson, Lynsey said: “For an athlete, being injured is the worst thing that can happen. When I was out for almost a year it was made even worse because I also lost my UK Athletics funding.

Balfour+Manson partner Andrew Gibb, has known the Sharp family for many years and originally arranged for the firm to become the young athlete’s first sponsor.

He added: “I have known Lynsey since she was a little girl and even then it was apparent she was an exceptional character. I’m delighted Balfour + Manson has been able to support her to the point where she is now one of the finest young athletes in the country.

“We’re very grateful she spoke with our trainees because they clearly found it highly motivating, as did a number of our more senior staff! We are all willing her to further success.”

This coverage was secured with The Evening Times as part of a sustained PR campaign by Holyrood PR on behalf of Balfour + Manson.