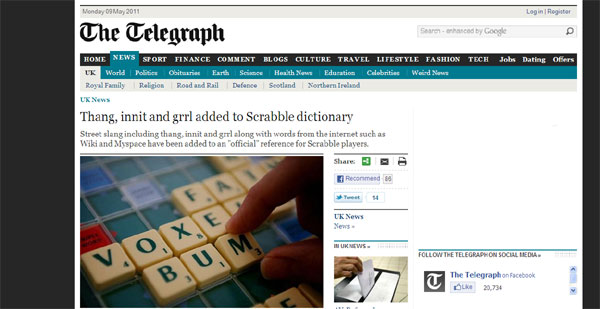 The official collection of words that can be used in the game of Scrabble was updated today with more than 3,000 new additions. In those included the words “thang”, “innit” and “grrl”, as well as terms from Indian cooking and different types of drug.

These additions – according to the editor of Collins English Dictionaries – are an “eclectic mix of new technological jargon, overseas English, recent colloquialisms, street slang, and a few fairly well-established phrases”.

Scrabble has provided entertainment for more than 60 years and although it can be played by young and old, it’s a challenging and intellectual game whereby your knowledge of the English language can be tested and proven.

I felt it always had an air of prestige about it – it was a game for intellectual and educated people and you couldn’t just use every day common words unless you had really rubbish letters and you didn’t want to waste your turn by getting another set.

From playing Scrabble when I was younger, it was one of my favourite games because it made you think and rack your brain for that word that you’ve read at some point, then stored away in a little compartment just for that occasion.

Of course that wasn’t always the case – it’s a great game for children to learn about language and you don’t have to use big, fancy words to enjoy the experience. You can even play it on Facebook now so it’s become more accessible to everyone.

But, it seems with these new words that the game has become less challenging and less interesting – by increasing the selection of words you can use to include slang just seems to go against the rules of the game. The rules are clear cut – excluding acronyms and abbreviations amongst others – so why should slang words be accepted?

When I was younger, I couldn’t have used half the words I used as slang in a game of Scrabble, so what’s changed between my generation and why have these slang words become so common place?

The reaction to the additional words has been mixed – on one hand it’s expanded the range of selection for the game, and if the words are commonly used in the English language, then why shouldn’t they be included? It represents the day and age that we live in. On the other hand, it’s a far cry from what made it so popular in the first place.

More than 150 million sets have been sold world-wide and the argument may well be that this inclusion of more familiar words of the younger generation may encourage more children to feel confident to play the game.