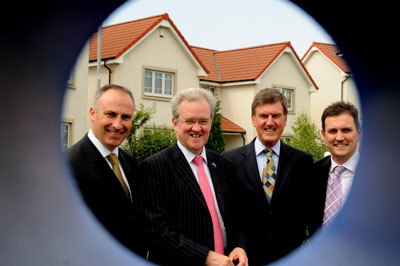 Scottish Water is keeping Scotland flowing, playing its part to ensure the delivery of desperately needed new homes and help support economic growth across the country.

From Wednesday, July 1 Scottish Water will help to enable developments by easing the upfront cash flow of developers’ charges for connection.

This will ease the financial burden on developers of starting up sites across Scotland, which is often the most expensive phase, before any income can be generated from house sales.

With around 18,000 new homes connected in 2008/09, Scottish Water is committed to helping Scotland grow and is keen to continue to lead and support development and economic growth in these challenging times.

Stewart Stevenson, Minister for Transport Infrastructure and Climate Change, said: “Scottish Water has continued to deliver for developers in recent years, creating new capacity in its assets across Scotland. This welcome move is helping developers’ cash flows and building on our efforts to support house-building and protect jobs during these challenging economic times.

“This announcement signals a significant step change in how Scottish Water and the development industry are working in partnership to help shape the economy of Scotland.”

Scottish Water Chair Ronnie Mercer: “We are pleased to be able to make this positive change. New homes and new customers are also good for Scottish Water.

“We are working with communities, developers and local authorities the length and breadth of Scotland to meet their needs and deliver tangible benefits through investment in clearer, fresher drinking water projects and initiatives which help protect our natural environment and deliver the additional capacity which allows communities to prosper and grow.”

The Minister attended an example of the part Scottish Water is playing in keeping large scale developments flowing, at the Wester Inch Village site in Bathgate.

Scottish Water’s playing its part in the regeneration of one of the former foundations of the West Lothian economy. The second phase of development at Wester Inch Village on the outskirts of Bathgate is underway, with additional capacity being made to the water and wastewater network for a further 1,100 homes.

Built on the site of the former British Leyland site, Wester Inch Village will increase the size of the town by nearly 50 per cent. Scottish Water is joining forces with a number of developers to make this a reality for more than a thousand families.

Jonathan Fair, Chief Executive of Homes for Scotland, the organisation which represents companies building 95% of new homes built for sale in Scotland, believes Wester Inch Village is an example of key agency joint working which will help to keep the Scottish economy flowing:

“This sea change in charging structures and timescales that Scottish Water has now implemented is an excellent example of a key agency recognising the importance of supporting developers’ cash flow at this critical time. Homes for Scotland is delighted to have worked with Scottish Water to implement this change in policy.  We look forward to working with, not only them, but other key agencies to expand this type of thinking into other realms of Scottish Government activity.”

The key to booming business

The town is central to the future prosperity of the West Lothian economy, and is the pilot in the Business Improvement District scheme. According to the annual publication, Prospects for the Scottish Economy, West Lothian is likely to be Scotland’s joint fastest growing area, at 8.3 per cent.

Some of the UK’s biggest house builders are involved in the project, consortium members Persimmon and Bryant along with a number of other developers including Barratt, Charles Church, Strathclyde Homes, Thomas Mitchell and Walker

John Cassie, Persimmon’s Regional Chairman for Scotland said:”Persimmon Homes are delighted that Scottish Water is agreeable to delaying payment for service connections on new developments. Any phasing of payments by utility companies has to be welcomed as it could be a significant factor in deciding to commence new developments bringing forward much needed employment opportunities.”

Over 2000 people have already moved into Wester Inch Village, since work started on site in 2005. So far the developers have completed more than 900 homes, with plans to construct more than 1,100 further homes.

The new Simpson Primary School serving the community has completed its first school year, with 200 pupils ranging from primary 1 to 7 now enjoying their summer holidays. The development also comprises a new village green, with cycle routes and footpaths, which are all open to the public.

Already in 2008/2009 Scottish Water has invested around £65 million to create growth in water and waste water projects. We also support those house builders who construct and upgrade networks as part of their development plans, with payments of nearly £18 million annually.