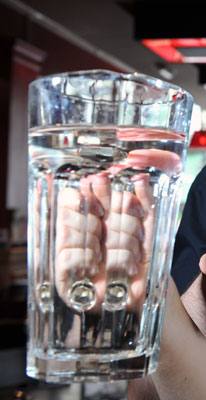 Scottish Water has welcomed areport by the Drinking Water Quality Regulator that confirms that the quality of tap water in Scotland remains very high.

During this regulatory period, 2006-2010, £650 million of investment was put into Scotland’s water infrastructure, including improvements to 187 water treatment works and other wide-ranging maintenance.

This will gather pace throughtout the rest of 2009 and beyond to ensure the quality of Scotland’s tap water improves even further.

During 2008 at total of 341,888 tests were carried out on samples taken from water treatment works, service reservoirs and in homes and businesses.

Of the 157,429 samples taken at customers’ taps, 99.75% were compliant with the stringent standards set by Scottish Ministers.

Richard Ackroyd, chief executive of Scottish water said: “Customers have not yet enjoyed the full benefits of this current investment in water quality in Scotland.

“We are very pleased however that the investment since we were formed in 2002 has resulted in the continued very high drinking water quality across Scotland.

“We continue to work closely with the DWQR to target enhancements and operational improvements to specific areas that will see further improvements to our customers’ drinking water in the next investment period.

“We want all our customers to enjoy the look and taste of this sustainable product which comes straight to their taps.”

The year 2008 saw some marked improvements,including:

Since 2002, Scottish public relations agency Holyrood PR has provided strategic PR support to the Scottish Water Press Office,whcih can be contacted on 01383 848 236