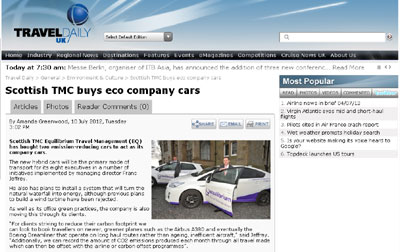 The two emission-reducing cars will provide transport for the eight executives of the Scottish firm EQ, as part of managing director Franc Jeffrey’s green initiatives.

Further plans include installing a system that will turn a natural waterfall into energy; however previous plans to build a wind turbine were rejected.

Franc said: “For clients striving to reduce their carbon footprint we can look to book travellers on newer, greener planes such as the airbus A380 and eventually the Boeing Dreamliner that operate on long-haul routes rather than ageing, inefficient aircrafts.”

“Additionally, we can record the amount of CO2 emissions produced each month through all travel made which can then be offset with the airline or carbon offset programmes.”

This coverage appeared on Travel Daily UK, E-Tid and ITCM and was secured on behalf of Equilibrium Travel Management as part of an ongoing PR campaign with Holyrood PR.