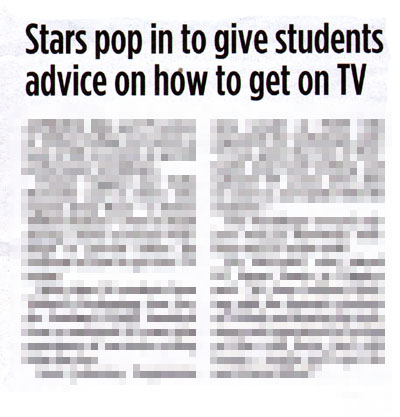 Small screen stars from Taggart and River City dropped into Edinburgh’s Telford College to give the performing arts students a guide in acting.

The duo gave advice to the students on ways to get into television as well as giving telling them about their own past experiences.

Scott Johnson, Programme Area Leader at PASS who organised the workshops said: “It was great that two of Scotland’s most hard-working and talented TV actors were able to come in and speak to the students.”

Colin McCreadie who played DC Fraser in Taggart said: “It’s been brilliant working with the fantastic students at Telford and sharing the technique and experiences of acting on film with them. And who knows maybe we will spot the next Karen Gillan!”

This coverage was secured with Edinburgh Evening News as part of a sustained pr campaign carried out by Holyrood PR on behalf of Edinburgh’s Telford College.