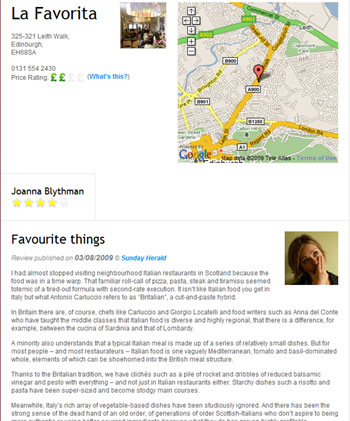 By giving the family-owned restaurant a positive review, she has also bossted its PR in Scotland, managed by media experts at Holyrood PR.

In her four star review for S1 Play Joanna, best known for her work with the Sunday Herald, wrote: “I was sceptical when some friends recommended La Favorita on Leith Walk in Edinburgh. It used to be the venerable Caprice and was distinguished by its wood-fired oven which produced rather good pizza but was otherwise undistinguished.

“I also learned that La Favorita was using the inspiringly authentic artisan Italian cheeses now being made in East Lothian by CAOS, another promising sign. Most restaurateurs can get away with serving workaday mozzarella and few will spot the difference. This attention to sourcing suggests an aspiration to do better.”

Joanna also praised the serving team and the wines, reporting:”A diligent front-of-house team delivers the sort of all-seeing, perceptive service you get in smart establishments in Italy.

“The wine list is a treasure trove of mainly Italian bottles, usefully grouped under headings such as “powerful and bold” with strong representation from well-known regions like Tuscany and less encountered ones such as Campania and Piemonte.

Scottish PR agency Holyrood PR provide expert media advice and PR support to Vittoria – and we’d like to pass our congratulations to Tony Crolla and his team at Vittoria on this well-deserved review.

To try the experience that Joanna enjoyed so much, bookings at La Favorita can be made here. 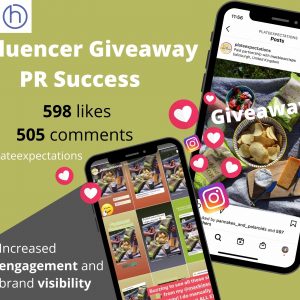 Giveaway proves to be a tasty success for digital PR team