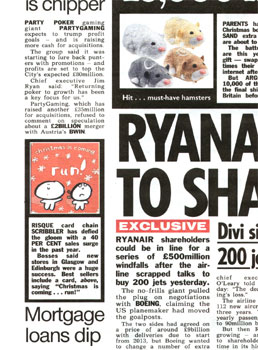 Irreverent card retailer Scribbler has been celebrating after being featured in Scotland’s biggest-selling national newspaper.

The company was featured in The Scottish Sun, which ran a n article about how Scribbler was recording a 40% rise in like-for-like sales across its 16 stores during the run-up to Christmas.

The hike in sales comes after the firm opened its first-ever Scottish shops earlier this year, on Glasgow’s Buchanan Street and Edinburgh’s Princes Street. Both outlets have proved successful and have defied the credit crunch, with the Glasgow store now ranking as one of the company’s most profitable branches.

The full article appeared in The Sun and was the result of a media drive carried out by Scottish public relations experts Holyrood PR PR in Edinburgh.