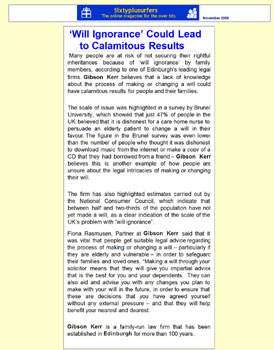 Sixty Plus Surfers ran a story about how Gibson Kerr was urging pensioners to make their wills now rather than risk leaving their loved ones with nothing by waiting too late.

The firm said that many people across the UK are currently suffering from “will ignorance” – meaning that they do not realise how important it is to make a will. Partner Fiona Rasmusen said that many people put off will-making because they do not think they are old enough to justify to set one up now, but this is putting their familes and loved ones at risk of receiving nothing if they die.

The full article appeared on Sixty Plus Surfers and was the result of a sustained media campaign by Holyrood PR PR in Edinburgh.