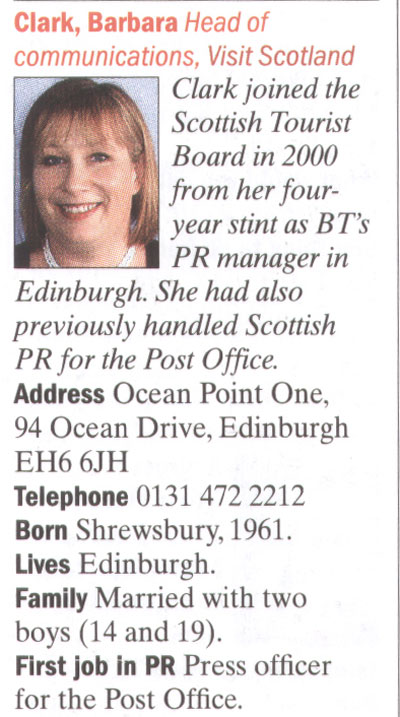 Thinking about Scotland’s top media people there are always a few likely names at the top of the list.

One of them is Barbara Clark, Head of Communications at VisitScotland.

Not only a multiple award winner at the PRide Scotland awards year after year, but one of the few Scots communicators to consistently earn a place in the PR Week PowerBook.

Aye, I’ve no idea how she manages it all, either.

PR secrets from a leading expert

So, the chance to get the inside grift on her PR and comms secrets should be an irresistible lure for anybody in the Scottish media.

Well, now’s your chance. Babs will be talking about her considerable Powers of Persuasion at a CIPR Freshly Squeezed breakfast event in Edinburgh on December 3.

It will be just a matter of days after Barbara and her team bring down the curtain on the colossal communications marathon of the Homecoming event – which must’ve tested her persuasive powers to the limit.

Not only is it a chance to meet one of Scotland’s PR greats – it’s a chance to hear about one of the biggest challenges in her long and distinguished career while the whole thing is still raw (if that’s the right word?).

Wow. When I look at it in those terms, I’m still chuffed to bits that we on the CIPR Scotland committee managed to pull it off.

People who follow Allmediascotland may already have caught my blog there – urging anyone from young PR people to old hacks making the switch from newspapers to do themselves a favour and check out the CIPR training programme.

Here are some of the guests we’ve already had this year:

And those are just the events I remember because I had a hand in organising them. If you’ve not yet cottoned onto the value of these events, then this breakfast event with Barbara should do the trick.

Do yourself a favour and sign up (or if you’re just starting your PR career, get your boss to pay for it).  With a bit of luck, I’ll see you there (full details and booking info below)

Lobbying can take place at local and national levels. Gain an insight into how lobbying can be implemented in your campaigns. Discover who the most important people are, and how to communicate with and influence them. Speaker: Barbara Clark, VisitScotland.