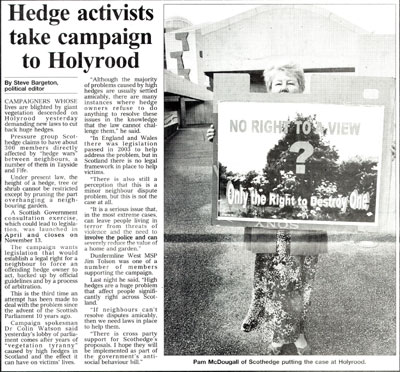 The Courier newspaper reported on the fact that campaigners from the Scothedge group, whose lives are blighted by giant vegetation, descended on Holyrood to demand MSPs deliver new laws to cut back huge hedges.

They expalined that the pressure group claims to have about 300 members directly affected by “hedge wars” between neighbours, a number of them in Tayside and Fife.

Campaign spokesman Dr Colin Watson told the renowned publiction: “Although the majority of problems caused by high hedges are usually settled amicably, there are many instances where hedge owners refuse to do anything to resolve these issues in the knowledge that the law cannot challenge them.”

The full article can be read in The Courier.