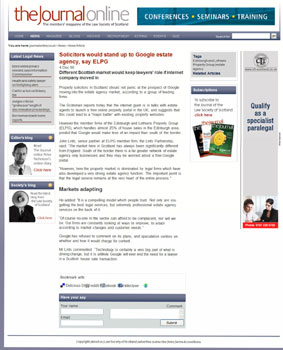 The Journal, which is read by senior figures in the Scottish legal industry, reported on how the ELPG was remaining bullish despite the threat of Google entering the property market.

The group said that despite the internet search engine’s proposals to set up a rival to the service offered by Rightmove, the Scottish housing market would be unphased by the plans. ELPG member John Lints said that, as house sales in Scotland were predominantly carried out by solicitors, the plans would have little effect north of the Border.

The full article can be viewed on the Journal website, and was the result of a sustained media campaign by Holyrood PR PR in Scotland.