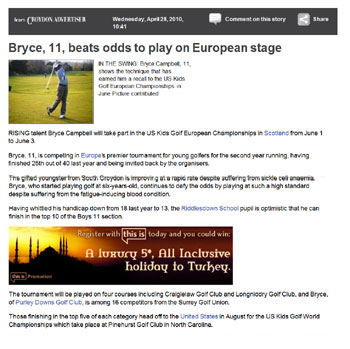 A major junior golf tournament taking place in Scotland this summer has received another high profile piece of PR in the regional press.

The U.S. Kids Golf European Championship was featured prominently in the English regional paper the Croydon Advertiser – which focussed on a young entrant from its catchment area.

The newspaper highlighted how young golfer Bryce Campbell was returning to Scotland for the tournament and was aiming to win the coveted European Champion title. During the 2009 event, Bryce was featured on the CBBC show Sportsround which was filming on location during the championships.

The full coverage can be seen on the Croydon Advertiser website and was the result of a media strategy maintained by Holyrood PR PR in Scotland.