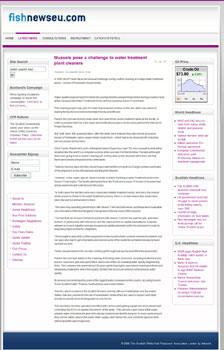 Water quality engineer Panton McLeod has been celebrating after its latest unusual job was featured prominently  in the European fishing press.

Fish News EU reported on a recent project that the firm carried out for Severn Trent Water – where a team of engineers had to clear tonnes of freshwater mussel shells out of a water treatment works.

The Panton McLeod team faced the problem during a routine cleaning project at the Campion Hills works in Leamington Spa. After discovering the blockage, the firm used specialist pumping equipment to remove the huge mass of zebra mussels before being able to clean the rest of the storage tanks at the facility.

The full article can be viewed on the Fish News EU website and was the result of a dedicated PR campaign by social media experts Holyrood PR PR in Edinburgh.