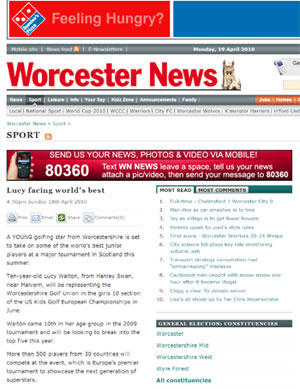 The U.S. Kids Golf European Championship has been given another PR boost after being featured in the pages of the English regional press.

The Worcester News published a story about how young competitor Lucy Walton was set to lock horns with some of the world’s best young golfers at the tournament in Scotland this June.

10-year-old Lucy, from Henley Swan near Malvern, is one of around 500 youngsters taking part in the three-day tournament. She will taking on competitors from across the globe for the European Championship title, as well as places at the prestigious World Championships at Pinehurst.

The full story can be seen on the Worcester News website and was the result of a sustained PR campaign carried out by Holyrood PR PR in Scotland.