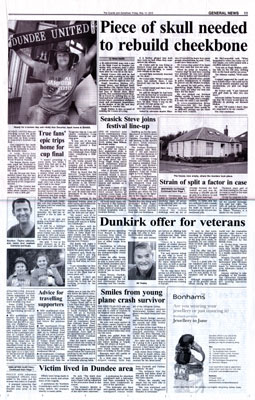 The Dundee Courier & Advertiser newspaper has reported on Norfolkline’s offer to accomodate Scottish war veterans to travel for free.

Norfolkline ferries – who provide the only direct sea route to Europe – advertised free travel on their Rosyth to Zeebrugge ferry for Scottish veterans to take part in the commemorative events marking the 70th anniversary of the Dunkirk Evacuation.

Under the offer, former service men and women were able to travel with three family members and a car – once in Zeebrugge, Dunkirk is only one hour away.

The newspaper article quotes Norfolkline’s general manager of passenger services for the UK and continental Europe, Chris Newey, as well as a member of the Dunfermline branch of the Royal British Legion (Scotland).

He said: “We are delighted to be able to make this offer to Scotland’s Dunkirk veterans. These men and women are heroes so offering help to get them to Dunkirk to commemorate their fallen comerades is the least we could do.”

The full article can be found on the Courier & Advertise website and was secured as part of a successful PR campaign carried out by the Holyrood PR.