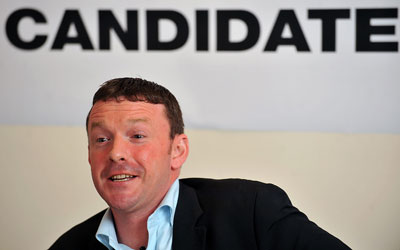 The Jury Team is delighted to announce “Scottish hero” John Smeaton as its candidate to become the next MP in the constituency of Glasgow North East.

The decision to support John Smeaton, who famously fought off terrorists during the attack on Glasgow Airport in July 2007, marks a significant first for the Jury Team – it’s the first candidate to be supported by Jury Team to contest a seat in the House of Commons.  The Jury Team had selected 52 candidates to stand in the European Parliamentary elections, achieving around 80,000 votes.

From its launch in March, the Jury Team has championed democracy, accountability and transparency. The Jury Team can make a real change to politics.

The Jury Team believes that John Smeaton is a man that can make real changes to the lives of people in Glasgow North East and the UK in general.

John Smeaton, 33, who was born and lives in Glasgow, is the former baggage handler who made headlines around the world when he was involved in thwarting the terrorist attack on Glasgow Airport in 2007.

His comments to terrorists were “Glasgow doesn’t accept this”.  This saw John become an internet phenomenon and led to him receiving the Queen’s Gallantry Medal for his actions.

John said he has agreed to stand as an Independent candidate with the Jury Team’s support because he believes people have become sick of MPs’ empty words and cliché-ridden promises.

He said:  “I want Scotland to see that an ordinary Joe with conviction can make a difference.
I want to take on the huge party machines and beat them. We must have someone in Parliament who knows how the public feel. I know I can do that. Someone who’s NOT going to fiddle expenses, NOT going to cost the country a fortune, but IS going to stand up for people the of Glasgow North East.

“And more importantly, I want the people of Glasgow North East to have an MP who’s going to fight every minute of every day for them – not for some political party.

“I know Glasgow North East, my mother worked in Possil and I spent a lot of time there, and I know the problems because I’ve been speaking to people about them.
“The Labour Party have had 30 YEARS to bring investment and jobs into Glasgow North East.  I haven’t noticed much difference and I know from strolling round constituency that folk living there haven’t noticed many changes either.

“Well I CAN. And if I’m elected, you’d better believe it: I WILL.  I’ll bring a storm down on Westminster, knock down doors and badger them until they listen.  No messing.

“My message to Glasgow North East is: Vote for change or stop complaining.  Let us all get out on the streets and make sure everyone votes for someone who cares and who will fight for them.”

Alan Wallace, Scottish Chairman of the Jury Team, said the Jury Team is about encouraging new people to go into politics to become MPs.

He said: “We support normal people with normal lives and normal jobs.  There are lots of them and what they have in common is that they are fed up with the fraud and spin of the current political class.

“We have a programme to clean up politics.   We want to replace the current political class with people who will look after their constituents.

“That’s why I am now very pleased to welcome the Jury Team’s candidate John Smeaton – a Scottish icon and a Scottish hero.  A man who showed the truth of “no messing”.  A man of the people.  A man who will stand up for Glasgow North East.  A man who understands what it is like to be poor and unemployed.  A man who cares.

“With John, we have the opportunity here in Glasgow North East to send a message to Westminster that we are fed up with the sleaze over expenses.

The Jury Team was founded by Sir Paul Judge after he became aware that many people had lost faith in government, and the areas of life over which it presides. He believes that a new kind of political movement – one based on the principles of good governance and transparency – is needed. The need for this has been reinforced by the current spate of political sleaze stories, which have highlighted the grip of the existing parties on British politics. The Jury Team pledges to break this grip by electing a new set of independently minded real people into Parliament.

The Jury Team will centre its campaign for the Glasgow North East by-election at its shop/constituency office at 449 Duke Street Glasgow, G31 1RD, and are actively recruiting volunteers to help with the campaign.