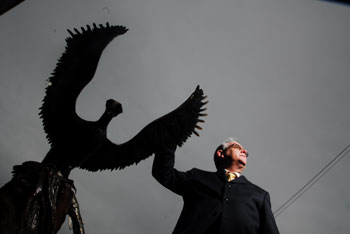 Scottish businesses could lose hundreds of thousands of pounds if the new Transport Minister cannot successfully deal with the latest bout of adverse weather, according to the country’s biggest independent courier firm.

Jerry Stewart, director at Eagle Couriers, believes that the next wave of bad weather that is expected to hit the country in the coming days could prove catastrophic for firms across Scotland – many of whom are still reeling from the effects of the recent December blizzards.

Eagle Couriers was among the companies worst hit by the recent snow chaos at the start of the month, experiencing an estimated £15,000 loss in earnings during the week and a half that the country was besieged with snow and ice.

And Mr Stewart has warned that unless new Transport Minister Keith Brown can avoid the grave mistakes made by his predecessor in dealing with the winter conditions, the Scottish economy will once again be under threat.

He said: “This is going to be a massive test for Keith Brown, and it is imperative that he acts now to ensure that the kind of debacle that occurred earlier this month does not happen again. We’ve already had the warnings about the new wave of snow and ice that is coming, and he has to be ready to tackle it from the outset.

“There are thousands of businesses across the Central Belt that are still reeling from the chaos that occurred during the last blizzards. Many of these firms had to tackle huge logistical problems to stay operational, or else they ground to a halt completely – which had a catastrophic effect on their day-to-day business.

“At one point, it was taking 14 hours for our drivers to travel from our head office in Bathgate to East Kilbride – which is a journey that should realistically only take an hour and a half to complete. The main M8 motorway was closed down for two days, the Government had no contingency plans in place and we were expected to just knuckle down and bear it. That is just not good enough.

“My firm makes emergency deliveries for the NHS and the Scottish National Blood Transfusion Service, as well as a range of other public sector and private companies, so it’s not an option for us to stop working. We had some of our staff, including myself, staying in hotels in Bathgate just to ensure they could get into work – as there was no chance of being able to commute from home.

“On average, our fleet of vehicles uses the M8 around 2000 times every week so to have this road closed for two days was nothing short of devastating for our business – as it meant we had to prioritise the most critical deliveries and battle through the weather to get them completed. In almost 30 years of being involved in the transport industry, I have never seen anything like that before.

“For those drivers who found themselves stuck for hours on main roads, there is also an environmental impact to consider. Many transport firms are committed to being as eco-friendly as possible these days, but you cannot be particularly green if you’re sitting in a traffic jam for hours on end, pumping exhaust fumes into the atmosphere.

“The disgraceful thing was that everyone had been warned about the bad weather that was coming, but there was no urgency whatsoever from the government to ensure that the snow was removed before it turned to ice. We had made provisions for it – by ensuring our drivers had safety equipment including special tyre socks, chains and shovels – so we were expecting some support from the transport authorities, but it never came.”

Mr Stewart added that the adverse conditions earlier this month had made many parts of the country completely impassable, and warned that similar gridlock could occur in the coming week unless contingency measures are put in place now and for the future.

He said: “For more than a week, it wasn’t possible to get access to most residential areas in Central Scotland, even in Edinburgh and Glasgow. This time round – if snow clearing and gritting vehicles aren’t deployed the moment the snow starts – the same thing will happen again where workforces are stranded and unable to commute into work, and companies are losing huge amounts of money in lost business.

“The new minister is highlighting how he will close roads and re-route traffic, which is a positive sign, but I believe there needs to be a huge overhaul of Scotland’s infrastructure to avoid the same problems occurring again. This is the third year in a row that we’ve seen these conditions in the UK, so it clearly isn’t an isolated problem.

“What we need now is for serious investment to be made in new technology and machinery to keep the roads clear and ensure public transport can keep running on time. Hopefully the Government will now make such a commitment, otherwise I fear that this kind of winter chaos will become an annual occurrence in Scotland.”

Eagle Couriers is Scotland’s top independent courier firm with almost 30 years’ experience in the courier industry, and currently employs over 100 staff between its bases in Glasgow, Bathgate and Edinburgh.