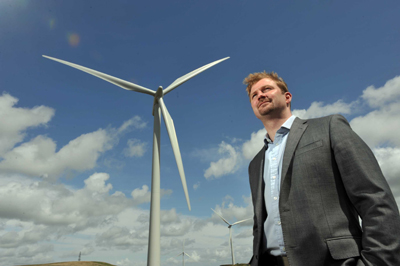 A Scottish specialist engineering company launched less than a year ago has won a prestigious business accolade at the inaugural Edinburgh Chamber Business Awards.

Xi Engineering Consultants scooped the ‘Most Promising New Business’ award at the event which saw some of the capital’s leading companies honoured.

The firm was hotly tipped for global success upon its launch and has already gained a reputation around the world for its expertise and innovation in the renewable energy sector, which has now been cemented by the award win.

Dr Mark-Paul Buckingham, Managing Director of Xi Engineering, said: “We are very pleased to be recognised for this esteemed award.  Our clients understand the value we bring to the sector and so it is great that the wider business community have now also recognised our contribution.

“We hope this serves as a flying start as well as a statement of intent. Not only do we have a pipeline of exciting projects, we’ve secured both private and public funding.

“This has been recognised by the sheer calibre of those who sit on our board. I’m both excited and grateful for that, as their wisdom and experience will be crucial to us as we go forward to achieve the growth we expect.”

Robert Carr, Chamber President, who presented the awards said: “Recognising successful companies is a worthwhile objective in itself, the more-so today as we seek to nurture a fragile recovery. It is through businesses who are innovating, growing and ambitious that our future prosperity will be based.”

Based in Edinburgh, Xi Engineering brings together a team of world-renowned science and engineering experts who tackle problems caused by vibrations in a wide range of sectors including renewable energy, construction, marine and defence.

Recently, Xi Engineering has attracted worldwide attention for its work on wind turbines in South West Scotland, to prevent them interfering with the MoD Eskdalemuir Seismic Array which monitors illegal nuclear testing.

Consultants from the firm are also currently working on an impressive range of projects within the renewable energy sector in partnership with organisations such as Hammerfest Strom and AES.

Created in May 2011, the firm received £400,000 of investment from sources including the Government-backed Enterprise Investment Scheme and Archangel Informal Investments with plans to advance Scotland’s strength in the renewable sector through its pioneering developments in vibration technology.

Gordon Stewart, a former CEO of American consulting giant PRTM, the world’s most successful operational strategy consultancy, has taken on the role of Chairman.

More information on Xi Engineering can be found at www.xiengineering.com

Comments Off on Hotel business down, but team spirit rises