Scottish Water top up taps have saved 120,000 bottles from waste 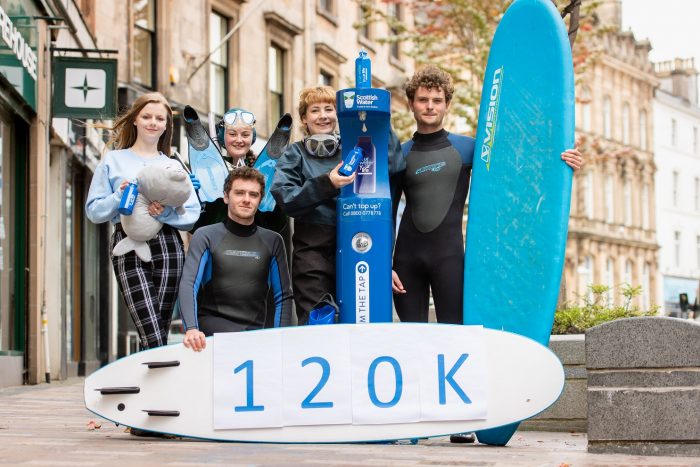 This Climate Week, Scottish Water has revealed that more than 40,000 litres of water have been drunk from its collection of Top Up Taps – the equivalent of 120,000 standard 330ml single-use plastic bottles.

This month marks one year since the first tap was installed outside the Scottish Parliament as part of a campaign to showcase the benefits of using refillable bottles and Scotland’s tap water.

A total of 12 Top Up Taps have now been installed around Scotland, from Shetland to Dumfries – with the next launch set to take place in Stirling.

Water sports enthusiasts at the University of Stirling and the universities’ Marine Conservation Society visited the tap, which is almost ready to go, on the city’s Port Street to mark the occasion.

The movement to Top Up from the Tap is now to expand across the country as success of the initial tap locations has led Scottish Water to commit to install 70 more over the next 18 months.

Each of the distinctive, high-tech water stations allows people to fill up with free, fresh water – while also allowing Scottish Water to track and report on usage. The tap network is planned to cover both towns and cities as well as the islands.

The most popular tap is on Glasgow’s Buchanan Street, where more than 10,000 litres have been consumed, with taps serving the both ends of the West Highland Way at Milngavie and Fort William also proving to be highly popular.

The Top Up Taps are part of Scottish Water’s Your Water Your Life campaign which aims to encourage people to top up from the tap to benefit the planet, their health and their pocket.

Brian Lironi, Director of Corporate Affairs at Scottish Water, said: “To be able to say that people topping up on the go equates to the same volume as more than 120,000 plastic bottles is a superb start to our campaign.

“We know the public share the same passion as we do for protecting the environment and improving their health so it’s fantastic to see the Top Up Taps have been so well used.

“It’s great for people to enjoy our brilliant Scottish tap water and we’re proud to be launching these taps across the country.

“We can see from the huge demand over this first year that there’s real appetite from the public to fill up their reusable bottles and hopefully it becomes the norm for people to seek out our top up taps around Scotland and take their bottles with them whenever they go out.” 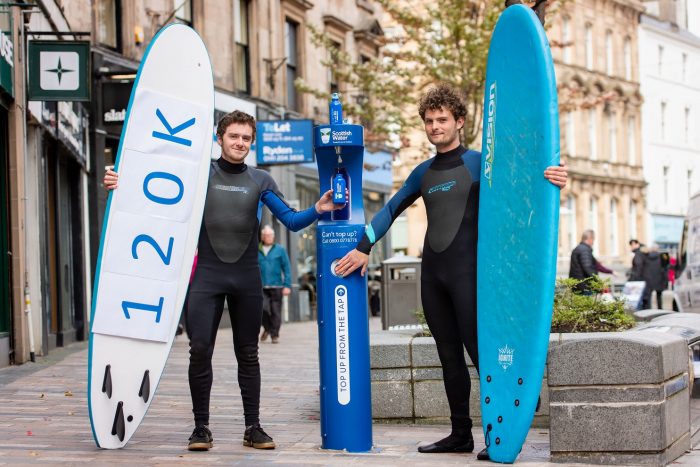 Scottish Water aims to ensure there is a tap in every one of Scotland’s 32 local authority areas with discussions to take place with local communities on the sites of the remaining taps.

The new taps are plumbed directly into the public water supply and each has digital tracking technology which logs how much water is being used and how much plastic potentially saved.

Brian added: “A full list of the current and planned Top Up Taps is available on our dedicated website and we’d encourage anyone to join the many others who are already incorporating a reusable bottle into their daily routine.

“The aim of the Your Water Your Life campaign is to make the taps the first port of call for people wanting a drink of water so it’s exciting we’ve made such great progress in just the first year.”

Clear, fresh drinking water is known to help boost concentration levels with Scottish Water delivering more than one billion litres of water a day to customers.

Find out more at: https://www.yourwateryourlife.co.uk/